Brad Pitt’s comment regarding his wife, Angelina Jolie’s filing for divorce was short: “I am very saddened by this, but what matters most now is the well-being of our kids,” he said in the statement. “I kindly ask the press to give them the space they deserve during this challenging time.” Jolie also made a statement, following her filing for divorce: “This decision was made for the health of the family…”

Given these two family-centric statements, what has struck some as interesting in Jolie’s filing papers is her request for sole physical custody of the couple’s six children. While Jolie has asked that Pitt have joint legal custody, she has clearly asked in her divorce filing that the children live with her for the majority of the time, and that Pitt have visitation or parenting time as it is most recently called, with their children.

Why would a parent ask for this for this particular arrangement?

In the Jolie-Pitt divorce, some reports indicate that perhaps the couple’s problems have to do with Pitt and Jolie’s divergent styles of parenting, which may have led to Jolie’s request for sole residential custody. Other reports hint that Pitt will want shared physical and legal custody of the children and will not agree to Jolie’s request that she be the parent of primary residence while he be granted parenting time.

New Jersey also has these same two types of custody: physical, also known as residential custody, and legal custody. [To learn more about these types of custody and available options in your custody matter, please read: Which NJ Child Custody Option is Right for You?] In most cases, the parents share legal custody of the children and courts strongly favor this. Legal custody means that both parents have equal say in the big decisions in the children’s lives, such as major medical decisions, educational decisions, religious decisions and the right to school and medical records. As for physical custody, one parent receiving sole physical custody is still common in New Jersey, but shared physical custody situation are becoming increasingly common as the New Jersey courts encourage as much time with the children for both parents.

In a true shared physical custody arrangement, both parents have their children with them fifty percent of the time. Some parents alternate weeks, months or even split the week down the middle for their parenting time, with one parent have thee overnights and the other four. The next week reverses that schedule. This situation is not ideal for all parents, especially if they live a great distance apart, and the children are in school. No court would favor a child traveling for hours in a car or bus to get to and from school every day. As in all custody or parenting time disputes, the courts will always first look at what is in the best interests of the children. But, if the both parents live a reasonable distance from the school and from each other, and both parents work schedules permit it, a court would certainly consider a shared physical custody arrangement.

Of course, the Pitt-Jolie family has a much different lifestyle than most. Their children could easily travel via private jet, helicopter or chauffeur. They are accustomed to an alternative lifestyle that could be easily supported by both parents. But, if Jolie’s concerns regarding Pitt’s fitness to care for the children due to alcohol or other addiction, the court will strongly consider this when determining custody.

Hopefully, every divorcing couple can find a middle ground and agree to a custody and parenting time arrangement that foster positives co-parenting. Divorce is hardest on the children, who don’t necessarily understand why their family is changing. For the Pitt-Jolie kids, it may be even harder; given their parents are two of the most famous people on the planet. In the end, the result will hopefully be six well-adjusted and happy children who have the opportunity to share time with both parents.

If you are involved in a custody dispute and need more advice or guidance, please contact us to schedule your consultation with one of our experienced family law attorneys, knowledgeable in the areas of child custody here in New Jersey. 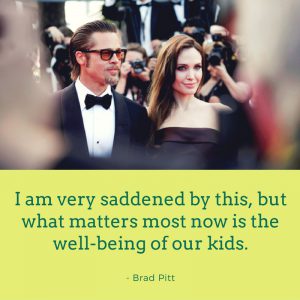 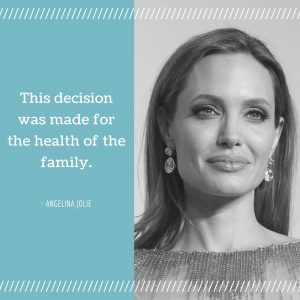 Does Addiction Mean You Can Cut Off Child Support?