You are here: Home1 / Blog2 / New Jersey Child & Parenting Issues3 / Kids, Divorce, And Manipulation: Parents Who Use Kids As Weapons 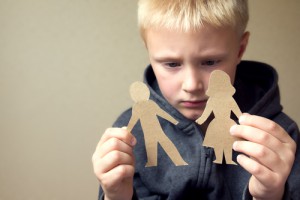 In divorce, narcissistic parents often buffer the pain of a failed marriage by trying to destroy their ex’s relationship with the children. Unlike healthy parents, who aim to work themselves out of a job by preparing children to live independently, a narcissist sees their kids as extensions of themselves. They cannot tolerate the thought that their children might grow up to chart their own course.

Sharing child custody loosens narcissists’ sense of control. They become terrified that their children might love the other parent more, or be more like that parent. How do they try to regain control? Often, it’s to embark on a mission to get the children back on their “side.”

Some narcissistic parents may actually believe the other parent is evil, and may view themselves as their child’s rescuer. Some may simply have more Machiavellian intentions. Either way, a narcissistic parent won’t hesitate to use children as weapons in the battle against their ex as a way to amp up an already high conflict divorce. Does this describe your ex? Here’s how to tell.

Signs Of A Manipulative Parent

Inappropriate communication Narcissists in their words and actions, often send their children the message that it’s not okay to enjoy time with the other parent. A narcissistic parent will get angry or distraught when kids return from time spent with the other parent – especially if they’ve have had a good time.

Interferes with visitation. A narcissistic parent will give the children choices about visitation or manipulate them into refusing visitation: “Would you rather go to Disneyland or spend a boring weekend stuck at your mom’s?”

Makes up or distorts information. A narcissistic parent will put her own “spin” on details to brainwash the child into thinking the other parent is dangerous or incompetent.

Shares adult-only information about the marriage and divorce. The manipulative parent may even alter the truth in order to get the kids to blame the other parent: “Dad says you wanted the divorce.”

Poor boundaries. A manipulative parent aligns with the child against the other parent. She will not let her kids have their own feelings and experiences. If she hates the ex, the kids must too.

Uses the child as a messenger. “Mom says I don’t have to like your girlfriend/visit your mother/make my own lunch.”

Threats of self-harm. In extreme situations, manipulative parents will threaten suicide if they don’t get what they want, i.e. sole custody.

Children of divorce who are manipulated by parents suffer long-term psychological consequences. They may have trouble recognizing or feeling entitled to their own feelings. As adults, they may feel smothered in romantic relationships because of growing up with an enmeshed parent. They learn how to create drama, not resolve conflict, so they often duplicate the same tumultuous interpersonal style.

Yet children of manipulative parents can be helped with appropriate interventions, including parents agreeing to a model know as parallel parenting. In an upcoming post, we will discuss strategies for protecting kids whose parents use them as weapons.

Are you engaged in a custody battle with a high conflict personality type? Our experienced family law attorneys can help. Please contact us today to schedule your initial confidential attorney consultation. 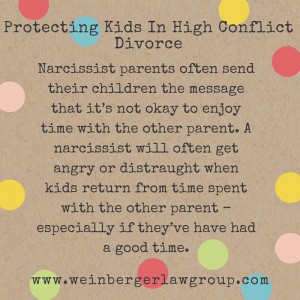 7 Things About Divorce Your Kids Want You To Know Kids, Divorce, And Manipulation: Three Strategies To Overcome Parental Alie...