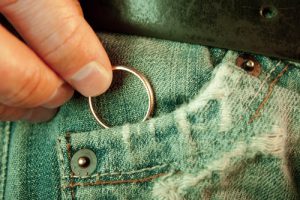 When you saw a sexy text message pop up on your husband’s phone, you confronted him. He admitted to having an affair not just with his co-worker, but also with two other women during your 10-year-marriage. He seems genuinely remorseful, has sworn it will never happen again, and has agreed to go to couples therapy. Your friends insist you should divorce him because he’s a sex addict.

But is his behavior a sign of actual addiction? Or was it “just” a case of serial infidelity? What’s the difference?

The term “sex addiction” has been in the news lately, thanks to a certain former New York politician’s continuing sex scandals, and is a lightning rod issue within the mental health field. The American Psychiatric Association rejected the proposed “Hypersexual Disorder” from inclusion in the DSM-V due to flawed research. On one side of the debate are CSATs (Certified Sex Addiction Therapists) like Rob Weiss MSW, who believe sex addiction is a “dysfunctional preoccupation with sex” (such as affairs, porn, anonymous sex, visits to prostitutes) that continues “despite emotional turmoil and attempts to stop.” Individuals concerned by their own sexual behavior can take this online sex addiction treatment test. People wondering if their spouse is a sex addict can take the Partner Sexuality Survey here.

On the other side of this hotly contested issue are psychologists such as David Ley, PhD, author of The Myth Of Sex Addiction, who believe sex addiction is a term coined by dogmatic clinicians looking to profit from pathologizing (mostly) male sexuality.

Proponents of sex addiction treatment believe sexually compulsive individuals, like alcoholics, cannot stop their behavior without the aid of significant intervention. Those in Ley’s camp believe that most men have a choice about how to behave sexually, and need to take responsibility for it.

Men who don’t, Ley believes, may suffer not from addiction but from psychiatric conditions that fuel manic sex binges, such as Bipolar Disorder, or have personality disorders that make them interpersonally exploitive. In the case of Bipolar Disorder, the proper medication can regulate libido and compulsivity. In the case of characterological conditions such as Narcissistic Personality and Borderline Personality Disorders, no amount of addiction treatment will curb these individuals’ sexual behaviors because they lack personal accountability.

So what should you do if your spouse has broken your marriage contract, but not the law?

Sex addiction therapists counsel partners who have discovered their spouse’s infidelities to follow the “one-year rule.” It doesn’t matter whether or not your spouse has an actual addiction that requires an inpatient facility and 12-step work; taking a year before deciding if you should file divorce papers will give you time to work on your marriage and determine if it can be saved.

This doesn’t mean that you simply wait and see if your spouse will cheat again. It means that you take this time to develop a concrete plan to deal with the problems that caused the infidelity and the problems created by the infidelity. This may include some or all of the following treatment options:
– Individual therapy for you and your spouse
– Couples therapy
– 12-step groups such as SAA (Sex Addicts Anonymous) and COSA (Co-Dependents of Sex Addicts)
– Psychiatric intervention to assess for and treat conditions such as Bipolar Disorder and Obsessive-Compulsive Disorder that may fuel hypersexual behavior.
– Inpatient or intensive outpatient treatment at a sex addiction center.

You will also need to work on setting limits and consequences. You may ask your spouse to move out for a few months while you process the trauma of betrayal. You may choose not to have sex (most likely meaning separate bedrooms) until he’s undergone STD tests, agreed to therapy, and the process of rebuilding trust has begun. If the children know about the infidelities, you will have to decide what to tell them.

Bottom line: not every infidelity leads to divorce. The discovery of a partner’s extramarital sex life can provide an opportunity for couples to deal with underlying issues they’ve avoided for years. Some report that their relationship is actually better because the commitment to working through their difficulties strengthened their bond and proved they have a marriage worth saving.

Do you have questions about the legal side of sex addiction, infidelity and your marriage? Please contact us today to schedule your confidential consultation with one of our skilled family law attorneys. We understand your concerns and can help.

Back to School Expenses and Child Support

Grandparent Rights: Can You Get Visitation With Your Grandchildren?