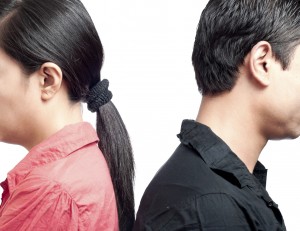 We have all heard at least one divorce horror story in which mistakes and missteps in the divorce process left one or both parties feeling angrier and more bitter than ever before. If you are going through a divorce right now, or thinking about filing, it is important to know that for the vast majority of cases, negative outcomes can be avoided through thoughtful planning and intelligent decision making.

In our new blog series, we will follow two typical couples going through divorce in New Jersey and use their case studies to highlight complications that can arise in a divorce case, along with the many possible ways to prevent these mistakes from leading to spiraling conflict and out of control costs.
The couples’ divorce stories are presented in installment form and will span the entire development of their cases. In part 1 of our case studies, let’s meet our two couples — Sharon and Robert, and Jason and Melissa — and take a brief look at what happened in each couple’s marriage. This is an important step, because in many cases it is the initial reaction to events in the marriage that ends up controlling how the divorce case unfolds.

We will post the next installment of our blog series in the coming weeks. Keep reading to see how each case develops!

Sharon & Robert
Sharon and Robert have been married for 13 years. They have two children, Samantha, age 10 and Leo, age 6. Sharon is 36 and works full-time as the business manager for a small company. She earns $76,000 per year. Robert is 38 and works in the construction industry. Robert’s employment tends to be sporadic. His income has averaged about $52,000 per year for the past ten to fifteen years, but during the past two or three years, he has had much less work than usual. Last year he earned only $19,000.

Sharon and Robert purchased a home together during their marriage. The current market value is approximately $350,000 and the mortgage principal is approximately $250,000. They also have $20,000 in joint savings and checking accounts, as well as stocks and bonds with a total value of about $100,000. Sharon has a 401k with a current value of $100,000. Robert has an IRA worth $20,000. The couple owns two vehicles, a sedan usually driven by Sharon, with a current value of approximately $15,000, and a pick-up truck driven by Robert with a value of $12,000.

Neither Sharon nor Robert has been happy for quite some time. Sharon feels that Robert does not work hard enough, and that he wastes money playing poker and drinking beer. Robert, on the other hand, feels that Sharon is too demanding and never wants to have any fun. He thinks she should be happy that he is home a lot of the time to help out and take care of the kids. Sharon, however, is actually resentful of Robert’s time at home because she would like to have more time with the children herself instead of being forced to play the part of the primary breadwinner. They have been arguing over these issues since Leo was a baby.

When Robert’s income dropped precipitously, instead of exercising caution and reducing his spending, he became depressed over his future and began to drink more heavily and spend money more recklessly. Hostility between them increased until Sharon reached the end of her rope and decided to file for divorce.

Jason & Melissa
Jason and Melissa have been married for 11 years. They have two children, Kyle, age 9, and Brianna, age 4. Jason is 36, works full-time as an accountant, and earns about $85,000 per year. Melissa is 37. She has a college degree and worked for a few years as an administrative assistant before having children, but she has been a stay-at-home parent since Kyle was born.

Jason never envisioned being the only working parent in the marriage. He was not happy when Melissa decided to stay at home, and he would like her to go back to work now. Melissa has made a few half-hearted attempts to find a job over the past couple of years, but, given her lack of recent experience, the poor economic climate, and the fact that they would have to pay for child-care if she went to work, she has not found anything that would add significantly to the family income.

Jason thinks that Melissa is simply not trying hard enough, and that she should at least be looking into training programs so that she will not end up unemployed forever. Melissa feels that Jason is pressuring her unfairly and that he does not understand the stress she is under as a stay-at-home parent. She has been suffering from high anxiety and panic attacks. Her usual glass of wine with dinner has turned into two glasses and sometimes three. Recently she has started to see a therapist and has also started taking an antidepressant for the anxiety. Jason has grown increasingly frustrated with Melissa’s behavior. He sees her as immature and lacking independence. The distance between them has been growing for several years, and Jason has recently told Melissa that he wants a divorce.

Special Note: Although Sharon and Robert and Jason and Melissa are fictitious names and personas, they are typical of actual couples filing for divorce in New Jersey.

You Are Invited to Our LIVE Facebook Family Law Q&A One Couple’s Dilemma: What Do You Do When Child Support Payments Are ...