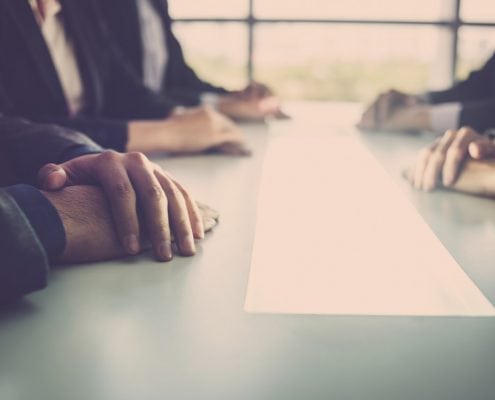 When Kevin and Jessica entered divorce mediation, they both immediately demanded “school night” custody of their 7-year old daughter Lilly. It became such a stalemate that it looked likely the pair would need to go before a judge. As a last resort, the mediator took each aside and asked them privately to explain the real goal of their custody demands — what did Kevin and Jessica really want?

As it turned out, Jessica’s schedule had her at work until 7 pm two nights a week, but with Fridays and her weekends off. Kevin’s schedule was much looser during the week, though he often got called into work on Saturday and Sunday nights. The mediator pointed out to Jessica how very little time she would actually spend with her daughter if she got her original demand, something she had overlooked in the heat of the moment. To Kevin, he stressed that it may not be practical to have Lilly on every school night, since most Sunday nights, for example, he would need to call a sitter.

Because the two lived in the same town, the solution suddenly became very clear and simple: Kevin would have Lilly from Monday afternoon through Friday morning. At the end of the school day on Friday, Lilly would get off the bus at Jessica’s house and stay with her mom until Monday morning when she got back on the bus to go to school; Jessica also negotiated more parenting time during school vacations. As a means of making sure Jessica still retained shared control over Lilly’s school week activities, Kevin agreed to send duplicates of any permission slips and school paperwork to Jessica on a weekly basis. In the end, what happened? Both Kevin and Jessica were able to get what they really wanted — quality time and influence. Would a judge have had the time to get to the heart of this matter in the same way divorce mediation did? Maybe, but maybe not.

What can you do to make sure your divorce results in a settlement you want? Here are three secrets to mediation success:

1. Ask yourself that all-important question: What do I really want? If you say you want the house, is it really the house? Or is it staying in the same community, owning rather than renting, or wanting to give your kids a sense of stability? Whatever it is, keep this firmly in mind as you enter negotiations. Maybe you will get the house, but if you remain open to possibilities, something equally good — or even better — has the chance to present itself.

2. State your goals, but name your bargaining chips. Make a two-column list. In one, list your demands, from the house to the flat screen TV to your stock portfolio to your desired child custody arrangement. In the column next to this, list any bargaining chips that are relevant to this item. If you get the flat screen TV, you are willing to give up the iPad or pay $500 cash. If you get the stock portfolio, you are willing to give up a larger percent of your company 401K, etc. Show the list to your divorce attorney, only, so he or she can see from the outset how much you are willing to compromise. Your attorney may also offer suggestions and feedback on your list.

3. Be patient. It would nice if your spouse could be equally reflective upon entering mediation, but don’t expect this to be the case. If there is a standoff on certain issues, this is where the mediator comes in to help. If you do have private time with the mediator at this point, you may want to share your higher goals to see if this can spark a creative solution to the impasse. Your ex will think they’ve won a victory (let him or her, it’s good for further negotiations!), but you will know that you just got exactly what you wanted.

Who Gets the Apartment? What Happens in a Divorce When You Lease or Rent Don’t Let Divorce Ruin Your Finances: 5 Key Steps