Boyfriend, Girlfriend, Significant Other, Soon-to-be-Ex…? The options seem to be endless and growing. Perhaps the only thing any of us can really count on from one day to the next is—it’s complicated! END_OF_DOCUMENT_TOKEN_TO_BE_REPLACED 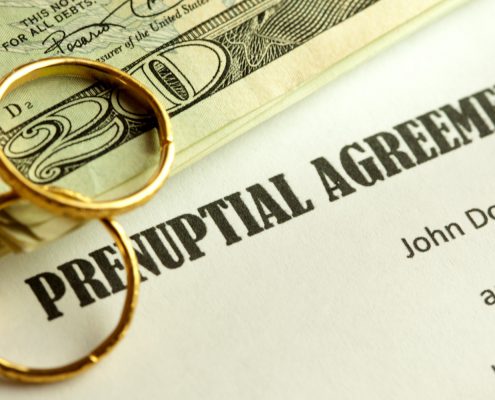 Family lawyers, having lost the battle to block a new law restricting judicial interpretations of prenuptial agreements, are girding for its impact. The law, signed June 28 by Gov. Chris Christie, mandates that judges evaluate the agreements as of the date of their signing, not the date of enforcement — effectively removing consideration of changed circumstances.

On June 28, 2013, Governor Christie signed into law key rule changes concerning the enforceability of prenuptial or pre-civil union agreements in New Jersey. Weinberger Divorce & Family Law Group attorney Carmela Novi wrote a guest blog explaining these prenuptial agreement rule changes when they were first proposed in the New Jersey Assembly last year (See New Jersey Bill Questions Conscionability in Prenuptial Agreements). However, now that they are official, how do changes to pre-nups affect those seeking pre-martial agreements, or attempting to enforce or dispute one already in place? END_OF_DOCUMENT_TOKEN_TO_BE_REPLACED Almost every article you’ll read about prenuptial agreements starts with the obvious: bringing up the idea with your intended groom or bride is awkward and un-romantic. Well, of course it is! What can be less conducive to fantasies of happily-ever-after than a document that, to most people, seems to be a way of preparing for a divorce before you’re even married? END_OF_DOCUMENT_TOKEN_TO_BE_REPLACED

END_OF_DOCUMENT_TOKEN_TO_BE_REPLACED

With a vote of 8-4, the New Jersey Senate Judiciary Committee approved a bill legalizing same-sex marriage, marking the first significant development in gay marriage rights since December 2006, when civil unions were enacted in the state.

In the debate before the vote, proponents of same-sex marriage relayed personal stories of discrimination and pointed out flaws in the current civil union law. (New Jersey’s civil union law is being challenged in state court by Lambda Legal, a national gay-rights advocacy group, which argues that civil unions in New Jersey don’t provide the same benefits and protections as marriage.)

Bill opponents argued that changes to the state’s marriage laws would diminish the meaning of marriage and quotes from the Bible condemning homosexuality and its supporters, NJ.com reports.

After the vote, Gov. Chris Christie of New Jersey, a first-term Republican, spoke out to say that he plans to veto the bill. He also challenged the State Legislature to instead put the issue on the ballot for voters to decide in the November election. A voter referendum on same-sex marriage is an “alternative path” to finally resolve the issue, Christie said. He then compared the gay marriage bill to a movie.

“We all know how this movie is going to end,” Christie, 49, told reporters after the Senate committee made its decision. “If they pass the bill, and they know this, it’s going to be vetoed. If they attempt to override that, the veto will be sustained. And they know that, so I’m trying to give them an alternate movie.”

If a statewide referendum on gay marriage were to occur, and the measure passed, New Jersey would become the first U.S. state where same-sex couples’ right to wed is approved by a public vote. Court rulings or legislation led to the gay marriage measures passing in the six states and the District of Columbia where it’s legal. Voters have rejected legalization in all 31 referendums on the issue, according to Freedom to Marry, a New York-based national advocacy organization.

Proponents of same-sex marriage are strongly urging Gov. Christie to rethink his veto plan. “Marriage equality isn’t like sports betting,” Sen. Raymond Lesniak, a Democrat, told the NYT, making reference to another amendment that was recently passed through a referendum. “It’s a civil right, which is already guaranteed in our Constitution. It’s up to the Legislature to guarantee these rights.” Lesniak sponsored the bill.

But if a vote on gay marriage happened today in New Jersey? It looks like it just might pass. Last week, a poll from Quinnipiac University (via the Wall Street Journal) found 52% support for gay marriage among New Jersey voters, the first time approval has edged over the 50% mark.

Why end the wait? Introduced by Assemblyman Louis Greenwald (D-Camden) and state Sen. Nicholas Scutari (D-Union), proponents of the marriage waiting period rule change say zero-wait weddings will give the state a competitive edge in the wedding tourism market and boost business in Atlantic City, Cape May and other New Jersey resort wedding destinations.

“This bill provides New Jersey’s small weddings market with a shot in the arm,” Greenwald said in a press statement on his website. “By gaining a competitive edge over our neighboring states, we will create jobs and jump-start the small businesses that make up New Jersey’s wedding and tourism industry.”

The proposed bill will also allow couples to apply for marriage or civil union licenses anywhere in the state, rather than the city in which they live, a move that possibly sets the stage for Atlantic City to become the Las Vegas of the East Coast for spur of the moment weddings. But if a couple marries on the fly after a night of high rolling and then wakes up in a state of not-so-wedded bliss? The bill gives them an easy out: proposed legislation allows for a marriage annulment without cause within 30 days if either a husband or wife requests it, according to NJ.com report.

Our own Bari Weinberger suggested, “From an economic perspective, there seems to be little doubt that it will be beneficial to local businesses. My concern is that if the bill requires a special annulment clause different from the current annulment provisions, it may be flawed from a cultural perspective.”

In the United States, 27 states have no waiting period for issuing marriage or civil union licenses. If passed, New Jersey would join Connecticut and Rhode Island as the only states in the Northeast without a marriage waiting period. Two of New Jersey’s neighboring states, New York and Delaware, both have 24-hour waiting periods.