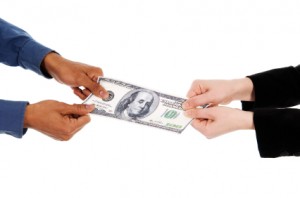 All couples have disagreements, but even in the healthiest of relationships, arguments about money are a top predictor of divorce, according to a new study from Kansas State University.

“In the study, we controlled for a couple’s income, debt and net worth,” Britt explains. “Results revealed it didn’t matter how much you made or how much you were worth. Arguments about money are the top predictor for divorce…”

Why is money such a problem? Quite simply, it appears to take longer to recover from money arguments than it does for couples to get over other kinds of arguments, researchers say. Survey results also turned up that money arguments are more intense because couples often use harsher language with each other, and money arguments tend to last longer.

Fighting over money early in a marriage, rather than several years after the wedding, also plays a role in predicting separation or divorce. “When [couples are first married] and already arguing about money, there is a good chance they are going to have poor relationship satisfaction,” Britt says.

In turn, poor relationship satisfaction may lead to adultery, substance abuse, and other issues that make divorce more likely to happen.

Given these stats, is there anything you can try in order to better “money-proof” your marriage? Yes! Here are three ways to boost your financial-savvy and lower your risk for money-based arguments:

1. Consider financial counseling: Before getting married, consider meeting together with a financial planner to learn the basics of handling money during marriage. As part of premarital financial counseling, it’s typical to pull each other’s credit reports and talk through how to handle finances fairly for both individuals.

Financial transparency at this stage can be an important step in preventing surprises down the road. Talking through tough financial situations — payment of student loans or how money will be allotted if one spouse stays home to raise children — will help decrease potential arguments, Britt says.

3. Investigate Postnuptial and Reconciliation Agreements: If one spouse has a sudden change in income or decides to stay home to raise the kids, a postnuptial agreement can provide an outline of financial support in the event of a divorce, as well as addressing other money matters.

If a couple has separated and wants to reconcile, but still have lingering money issues, a reconciliation agreement can spell out such issues as to who pays what bill, how much each partner contributes to the rent or mortgage, and more.

How money-savvy is your marriage?

Staying Healthy During Your Divorce In the News: Jason Patric, Sperm Donation, and Fathers’ Rights