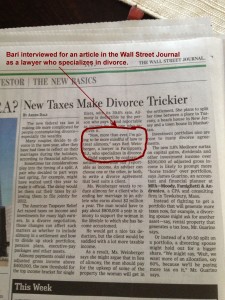 What does ATRA mean for your taxes — especially since you are going through divorce? The Wall Street Journal recently investigated how provisions in ATRA could affect divorced couples, zeroing in on the issues of alimony and division of marital assets. Weinberger Divorce & Family Law Group attorney Bari Weinberger is a featured legal expert in the article, New Tax Rules Make Divorce Trickier.

The WSJ found the following:

The American Taxpayer Relief Act raised taxes on income and investments for many high earners. In a divorce negotiation, those changes can affect such matters as whether to include alimony in a settlement and how to divide up stock portfolios, pension plans, executive pay packages and other assets.

Alimony payments could raise adjusted gross income above $400,000, the new threshold for the top income bracket for single filers, with its 39.6% rate. Alimony is deductible by the person who pays it and reportable as income by the one who receives it.

“Now, more than ever, I’m going to be more mindful of how to treat alimony,” says Bari Weinberger, a lawyer in Parsippany, N.J.

As an example of how all this could play out, Weinberger cited a client in the process of ending her marriage to a high-earning professional athlete. As it stands, the husband would need to pay out approximately $800,000 per year to allow the client to maintain the lifestyle to which she has become accustomed. In addition to alimony, the client is also set to take ownership of several homes the couple owned.

As Weinberger points out in the article, if the $800,000 in spousal payments were to hold, the husband would get a nice tax deduction, but the client would be subject to higher taxes. Weinberger is now contemplating whether to “argue that in lieu of alimony, the man should pay for the upkeep of some of the property the woman will get in the settlement.”

Likewise, when it comes to splitting other assets, such as stock portfolios or any investment that generates taxable income, both parties should be aware of what this might mean come tax time. For example, in another key provision of the ATRA, capital gains, dividends and other investment income over $200,000 of adjusted gross income will subject a new 3.8% Medicare surtax.

This puts divorcing couples in the predicament of possibly fighting for real estate property that can be written off a tax loss, rather than grabbing the stock portfolio which may mean paying more on April 15. On the other hand, some spouses may not dig in and argue for more in an asset split — say a 60-40 split, rather than 50-50, because they want the extra padding to offset taxes.

Bottom line: As if post-divorce finances weren’t complicated enough, it is essential that your divorce attorney understands how certain aspects of your settlement can raise or lower your tax burden in light of these new tax changes.

What Happens to Your Inheritance in a Divorce? NJBIZ Best 50 Women in Business Awards