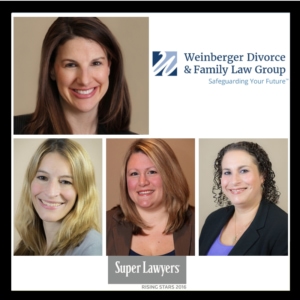 Super Lawyers is a rating service of outstanding lawyers from more than 70 practice areas who have attained a high-degree of peer recognition and professional achievement. The selection process includes independent research, peer nominations and peer evaluations.

To be eligible for inclusion in Rising Stars, a candidate must be either 40 years old or younger or in practice for 10 years or less. While up to 5 percent of the lawyers in a state are named to Super Lawyers, no more than 2.5 percent are named to Rising Stars

Our most heartfelt congratulations go to:

Bari Z. Weinberger: Our managing partner, Ms. Weinberger is enjoying her tenth year as a Super Lawyer in 2016. She has extensive expertise, is a Supreme Court Certified Matrimonial Attorney and has been the recipient of several distinguished awards for her work including:

Ms. Weinberger practices primarily out of our Parsippany office.

Erich “Rick” Schneider: Mr. Schneider is also enjoying his tenth year as either a Super Lawyer or a Rising Star. His reputation in the community is one of caring and compassion. In 2014, Mr. Schneider received from the Monmouth County Bar Association, the Bernard H. Hoffman, Esq., Award for service to Family Law in Monmouth County. This award is bestowed on an “attorney member of the Monmouth Bar Association who has made a substantial or procedural contribution by service to the administration of the Family Court system to the family law practice.”

Veronica R. Norgaard: Ms. Norgaard is a skilled and recognized family law trial attorney, commentator and professor, who is enjoying her eighth year as a New Jersey Rising Star. She is an active and experienced member of several bar associations and proudly volunteers as a fee arbitration panelist for the District IX Fee Arbitration Committee in Monmouth County.

Rachel E. Partyka: Ms. Partyka has dedicated her career to helping those in need has been named a New Jersey Rising Star in 2014 and 2015. She has received several awards demonstrating her dedication to helping others, such as Lisa and Kolin Pimental Award for Excellence in the Study of Domestic Violence Law & Commitment to Advocacy and The Ronald B. Atlas Outstanding Attorney Award in 2009, during her tenure as a Staff Attorney at Central Jersey Legal Services.

Jason C. Tuchman: Mr. Tuchman has been recognized as a New Jersey Rising Star seven times since 2010. He was also recognized as a “Top 10 Attorney Under 40” by the National Academy of Family Law Attorneys in 2014. He is a dedicated advocate for his clients and his community, participating as a volunteer attorney for Partners for Women and Justice in 2005. He also volunteers as an expert panelist for the Early Settlement Panels in Bergen and Passaic counties. He is also a Trustee for the Passaic County Bar Association.

Jessica R. Sprague: Ms. Sprague is enjoying her sixth time as a New Jersey Rising Star, having been recognized in 2011, 2012, 2013, 2014, 2015 and 2016. While attending law school, she participated in Seton Hall University’s Center for Social Justice representing low income people in family law matters. She is a committed and kind-hearted advocate for her clients, while participating in her community as a member of the Tri-Boro Chamber of Commerce.

Weinberger Divorce & Family Law Group is proud to have such distinguished and recognized attorneys working with us. We strive for excellence at every turn and our family of attorneys embodies that commitment to our firm and to our clients every day. To meet with one of our attorneys, please contact us to schedule your  initial consultation.

Recognizing The Signs Of Spousal Abuse In Men …And What To Do Next Filing Tax Returns after Divorce, Part 2