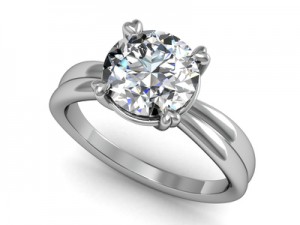 The bigger the diamond, the shorter the marriage? According to a study conducted by researchers from Emory University in Atlanta, Georgia, the giving of a pricier engagement ring before marriage could be an indicator of increased divorce risk down the road.

Just how big a rock can spell trouble? As reported by the Today Show, researchers surveyed 3,000 U.S. adults who had once been married for more than 13 years and found that men who spent between $2,000 and $4,000 on an engagement ring were 1.3 times more likely to get divorced than those who spend between $500 and $2,000.

What about wedding costs, which can also push a couple into debt? Researchers found they can similarly raise divorce risk. For example, spending more than $20,000 on a wedding was linked to significantly higher divorce rates than those who spent between $5,000 and $10,000. Want to stay married? Spending less than $1,000 is associated with the lowest risk of divorce.

Researchers also found some ways to raise the odds for staying together. Things like regularly attending religious services, having a baby, a bigger wedding (i.e. inviting more people, but still keeping costs low), and splurging on a honeymoon trip are all linked to a lower risk of divorce.

So, to stay happily married, the magic formula appears to be: small ring, huge backyard wedding with some person of the cloth officiating, then Jamaica or Paris for the week, followed by a baby nine months later.

How does this stack up with your plan?

8 Tips For A Super Solo Thanksgiving An Open Letter to the NFL: Play This Season’s Super Bowl Off the Field