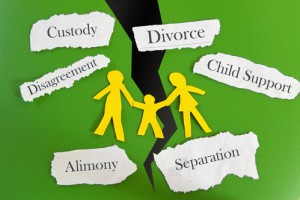 In our last installment of our ongoing divorce case study series, we saw Melissa and Jason making good progress with the division of their marital assets and debts in mediation. Meanwhile, the disappointing recommendations Sharon got from the Marital Early Settlement Panel (MESP) in Part 8 just seemed to get worse for her in Part 10.

After recommending that Robert keep the family home as part of an equal value distribution of the couple’s property and debt, the panel went on to recommend that Sharon pay Robert durational alimony in the amount of $244 per week ($12,688 per year) for eight years. Finally, the panel calculated that Sharon would owe Robert child support in the amount of $129 per week, even after she received an income reduction for her alimony payments and credits for payment of both work-related child care and children’s health insurance premiums.

Sharon is distraught. She has rejected the panel recommendations, and on her attorney’s advice she is planning to seek a vocational evaluation to try to demonstrate that Robert can earn more money. She is worried, though, that the evaluation may show that there really isn’t more work currently available to him. Now she is facing the expense of a trial. Worse still, she knows that she may end up paying for some of Robert’s attorney’s fees as well as her own.

Much to Sharon’s surprise, a couple of weeks after the MESP she receives a call from Ms. Shark informing her that Robert’s attorney has presented a settlement offer. Robert is asking for an additional $30,000 from their savings in exchange for reducing the durational alimony from eight years to five years.

Apparently he has decided to enroll in an educational program that will increase his qualifications for management opportunities, and he is in need of liquid funds to pay for school. He is also offering to give Sharon an additional day with the children, changing the parenting time schedule to four days per week for Robert and three days per week for Sharon.

“I wouldn’t accept this if I were you, Sharon,” urges Ms. Shark. “It will save you a few thousand dollars over time, but it means you have to pay more up front. After you pay my bill you won’t have any liquid assets left. How about you offer him $10,000 up front, but only if he will agree to just one year of alimony and give you four days per week with the kids?”

Sharon thinks this over. She has begun to suspect that Ms. Shark’s aggressive positions have done little more than increase Sharon’s attorney’s fees. Not only that, but Sharon is no longer certain that she even wants more than 50 percent of parenting time. Her job has been so stressful, and she will need to keep working harder than ever after the divorce is final if she ever expects to make up her financial losses. She wonders if perhaps it would be better to have more help with the kids so that she can have a little time to herself and also be able to relax and enjoy her time with them more. She decides to counter Robert’s offer with $20,000 up front, two years of alimony, and 50/50 custody.

That weekend when she sees Robert for the parenting exchange, he asks if they can talk for a few minutes. He tells her he is happy to share custody 50/50, but points out that he will have a more flexible schedule than Sharon while he is completing his school program. If he has more parenting time, they may be able to reduce their high child care costs. Sharon sees his point. Eventually they agree that the parenting split will remain at 4 days per week with Robert and three days per week with Sharon for the next two years, with a plan to change it to 50/50 once Robert has completed his program and found a new full-time job. Robert also agrees to accept the $20,000 up front, provided that Sharon pays durational alimony for three years, with the term remaining modifiable, and also makes a $5,000 contribution to Robert’s attorney’s fees.

“There’s nothing I want more than to stop running up attorney’s bills and court costs right now,” Robert tells Sharon. “I do still want to try to keep the house though, so let me see if I can make that work somehow.”

“You can keep it,” Sharon answers. “I want the kids to be able to stay where they are. So don’t worry about it. If you can’t refinance right now, we’ll figure out some other way.”

As Sharon and Robert part for the night, Sharon is amazed to feel a lightness surrounding her, as though an enormous weight has dropped from her shoulders. It’s not just a feeling of relief about the ongoing financial stress—she feels happy that she has been able to put aside her anger and do something good for her children.

Might Sharon and Robert have ended up in the same place for less money and less aggravation if they had started out in mediation instead of litigation? There’s no way to know for certain, of course, but if Sharon had to do it again, she thinks, she would definitely try that route first.

Wondering whether or not it makes sense to try mediation before committing to litigation in your divorce? Weinberger Divorce & Family Law Group offersan initial consultations for both attorney and family law mediation services. Contact us together if you are committed to trying mediation and would like to interview a mediator. Contact us individually if you would prefer to speak to one of our attorneys about possible legal representation or mediation consultation.