In our last installment of our ongoing case study series, we saw how the Marriage Early Settlement Panel (MESP) made recommendations for property distribution in Robert and Sharon’s divorce case, filed in New Jersey family court. Today we will look at how the distribution process might work in private divorce mediation.

Subject No. 2 – Jason:
Jason and Melissa arrive at their third mediation session ready to discuss their financial issues. Although they had originally planned to have this meeting just a couple of weeks after their second session, they later decided to reschedule to give Jason time to look for a new place to live. Jason tells the mediator, Brian Calm, that he is now renting a condominium about three miles from the family home and that the children have begun spending three nights per week there. Both Jason and Melissa report that this arrangement is working well and the children seem to be adjusting. The mediator compliments Jason and Melissa on their efforts to make the process as easy as possible for their children. He then suggests that they move on to a discussion of property division.

“Well,” Jason begins, “Why don’t we just divide everything 50/50? Isn’t that how it usually works?”
“I’m not so sure about that,” answers Melissa, “My attorney told me that it doesn’t have to be exactly equal in New Jersey. I’m okay with 50/50, but only if I’m going to have enough alimony and child support to be able to keep living in the house and paying all the expenses.”

“Hold on Melissa,” Jason responds, an irritable edge creeping into his voice, “You are going to have to get a job, and if that house is too expensive, then there isn’t any reason that you can’t find a cheaper place to live. Right now I’m earning all the money and living in a much smaller place than you are. Does that really seem fair?”

Melissa doesn’t answer for a moment, and when she does, it’s clear that she’s struggling to control her emotions. “Jason,” she says finally, “you know perfectly well that any job I can get right now isn’t going to be worth the cost of child care—at least not until next year when Brianna starts going to school for a full day. And don’t you want the kids to be able to stay in their home? You’re always going to be able to earn a lot more than me. You can easily make up anything you lose now, but I won’t have that ability.”

As Jason and Melissa continue discussing Melissa’s employment prospects, the tension between them rises. This is understandable, as this subject has been a source of conflict in their relationship for a long time. When Jason begins to raise his voice and Melissa starts to cry, Mr. Calm suggests that they all take a break, and then figure out what an equal division of property would actually look like.

“One really nice thing,” the mediator points out, “is that you two have some savings and you don’t have any significant debt other than the home mortgage. You both pretty much agree on the home value and we have the mortgage information, so the big question will be whether or not it makes sense for Melissa to stay in the house or whether you think you will need to put it on the market. When we come back we can take a closer look at the numbers, but you don’t have to make any final decisions until after we talk about alimony and child support.”

When the session reconvenes, both Jason and Melissa are feeling more relaxed and are ready to review their marital property. They have agreed that their home has a current market value of approximately $250,000 and a remaining mortgage principal of approximately $100,000. They own two cars, Jason’s 2013 Lexus sedan and Melissa’s 2011 Toyota minivan. They agree that the Lexus is worth about $27,000 and the minivan is worth about $12,000. All of their car loans are fully paid. They have joint checking, savings, and investment accounts totaling $150,000. Jason has a 401k with a current value of $150,000 and Melissa has an IRA worth $15,000. They have no debt other than the home mortgage, and neither of them is making any separate property claims.

Mr. Calm has them look at what would happen if Melissa were to keep the house with an equal division of the value of all of their property:

Melissa and Jason take a few moments to process all of this information. “So,” Melissa finally says, “I could buy out Jason’s share of the house with our cash and investments, but then I would have almost no cash left, right?”

The mediator nods, “That’s one scenario. There are other possibilities though.”

Melissa looks at Jason and notices that he seems much calmer than before. “What do you think?” she asks. “You’re the accountant, right?”

Jason looks pleased at this acknowledgment from Melissa. “Well, what I was thinking,” he says, “Is that we had been talking about refinancing the house because interest rates are so low right now, but we just never got around to it. Our monthly payments are close to $1,000 per month. If you could refinance the house by taking out a new loan for more money, that would give you some cash, and you could probably lower your monthly payment amount also. It would extend the term of the loan, of course, but it might be worth it.” He pauses and goes on to add, “Honestly I have to say that I’m relieved to see that we’re in better financial shape than I thought we were.”

“Why don’t we stop here for now,” suggests Mr. Calm. “Both of you can think this over and maybe run it by your attorneys also. We’ll talk about it again after we look at alimony and child support during our next session.”

Jason and Melissa both leave the session feeling good about the progress they are making and hopeful about the future.

Would mediation be an effective choice for the issues you are facing? For a confidential analysis of the financial issues involved in your divorce, please contact us to schedule your initial consultation. Weinberger Divorce & Family Law Group offers both attorney and family law mediation services. 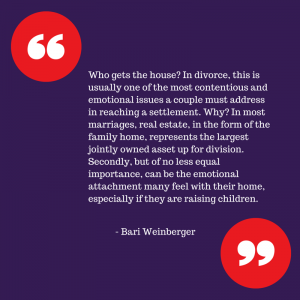 Divorcing A Narcissist: 5 Strategies For Getting Through It How To Get Help When You’re A Male Victim Of Domestic Violence