In a recent, unpublished Appellate Division case, Manger v. Manger, the court found that an ex-wife could not ask the court to change her alimony award, because she was never awarded alimony to begin with. Did you bypass spousal support in your original divorce settlement? Here’s what this case may mean for you.
In Manger v. Manger, the parties were divorced in May of 2008 and ordered to participate in binding arbitration to resolve all of their issues. The arbitration panel did not award Ms. Manger any spousal support at that time, finding that the parties’ financial circumstances did not warrant it. Instead, Mr. Manger was given possession of the couple’s hair salon, and Ms. Manger was given $650.00 per week as “non-taxable equitable distribution” of the salon. In 2014, Mr. Manger, then age seventy-four, told Ms. Manger that he sold the hair salon and retired. So, Mr. Manger would not be sending the $650.00 per week any longer. As a result, Ms. Manger filed a motion with the court asking that her alimony be modified. Her motion asked for Mr. Manger to provide financial information and for the court to hold a hearing about changing her alimony.

Ms. Manger had one central problem: she was never awarded alimony in the first place. The arbitration panel gave her $650.00 per week, but this was for her share of the marital business, not alimony. The appellate court stated, “Defendant’s arguments ignore the fundamental flaw that she never received alimony, and, as found by the judge, she failed to sustain her burden to prove claims of substantial change in circumstances warranting an alimony award.”

So, even if Ms. Manger had been awarded alimony in arbitration, she still failed to provide to the court any proof that her financial circumstances had changed so much so that she now required alimony from Mr. Manger. The court said, “In fact, her initial moving papers included no information except her conclusory allegations and protest regarding the termination of the weekly equitable distribution payments.”

The court was so unimpressed with Ms. Manger and her argument that they upheld the lower court’s decision to have her pay Mr. Manger’s counsel fees. They found that she filed her papers in bad faith and stated that this was supported by “her bare accusations as to the fraudulent sale of the [hair salon], the failure to address change of circumstances or attach the required prior case information statement demonstrating her economic circumstances at the time of divorce [and] impugning plaintiff’s right to sell the business clearly permitted by the [judgment of divorce]…”

They further stated that they certainly deferred to the trial court’s decisions and rejected Ms. Mange’s claim that the award of counsel fees to Mr. Mange was an abuse of discretion on the part of the family court judge.

What questions do you have about alimony? Please contact us today to set up your initial consultation with one of our experienced and knowledgeable family law attorneys. We can assist you in creating a strong strategy for securing your future. 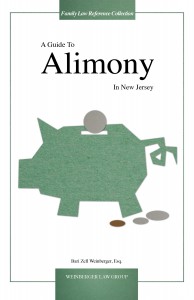