We have been tracking the progress through the New Jersey legislature of Senate bill 1046, which, if passed into law, would cause a major change in termination procedures for New Jersey child support payments. This bill would result in child support payments ending automatically if or when a child marries, dies, enters military service, or reaches the age of 19, unless the child is currently in an out-of-home placement through DCP&P, or unless a court order specifies another date.  On July 23, 2015, the Senate passed this bill by a vote of 31-2. The measure now moves to the Assembly.

While we must caution parents that S-1046 is not yet the law, we also wish to help our clients with current or anticipated child support orders understand exactly how the bill would change the current law, and what it might mean for their own situations. Some of the questions we have heard include the following:

Will these changes affect current child support arrangements?
Yes. As currently drafted, the bill would apply to pre-existing child support orders that lack a specified termination date. Although ordinarily, legislative changes do not apply retroactively, in this case, the primary change is to court procedures, rather than to substantive law. While New Jersey does not currently have a legally defined age for automatic termination of child support orders, a child’s emancipation triggers the end of a parent’s responsibility for support, and New Jersey law does include a presumption that children are emancipated at age 18. This presumption can be overcome by evidence that the child is still dependent and in need on ongoing financial support. Under current procedures, child support payments do not end automatically at 18, or at any other age, unless an age has been specified in a court order. If no age is specified, the parent responsible for paying support must file an application in court to end the payments. This bill would relieve the paying parent of that obligation and apply the presumption automatically by the age of 19, unless the custodial parent files an application for an extension before that. The bill also clarifies that the paying parent can still file an application for modification or termination of child support at any time. 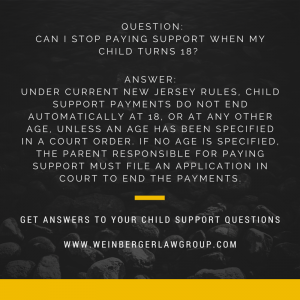 What happens if a child or parent wants support to continue past age 19?
A custodial parent seeking continuation over a non-custodial parent’s objections must establish “sufficient proof,” using court-approved forms and additional supporting documentation. If both parents want support to continue past age 19, they are free to agree to that. As long as the child support won’t continue past the child’s 23rd birthday, the parents can file their agreement in court as a child support order. Under the current version of the bill, however, child support cannot extend past age 23.

If a child who is turning 19 is attending college or another post-secondary educational program, can the child apply for continued support?
No. Under the amended version of the bill, only the “custodial parent” can apply for and receive continued support—as opposed to the child or anyone else who might be acting as guardian for the child. While the custodial parent can apply for continued support for children enrolled in post-secondary study, support will not be granted automatically. As discussed in the case of Newburgh v. Arrigo, 88 N.J. 529, 1982, New Jersey courts determine a non-custodial parent’s responsibility for payment of post-secondary tuition on a case–by-case basis. S-1046 states that for post-secondary school attendance to be considered as the basis for continuation of support after notice of a proposed termination, the child must attend full-time, as defined by the school, during some part of each of any five calendar months of a year.

Is age 23 the cut-off age even if a child is still pursuing studies or is unable to find employment?
Yes. As drafted, age 23 is an absolute cut-off for receipt of child support under any circumstances (except for already past due amounts). Of course, a parent is always free to help an adult child with financial support, and in some circumstances the parent may actually owe the child money—due to a contractual obligation, for example—but after age 23, these payments can no longer be characterized as “child support.”

Can a custodial parent seek continued support beyond age 19 for exceptional circumstances, or if a child has a mental or physical disability?
Yes. “Exceptional circumstances” are not defined in the bill. However, the bill does provide that if a physical or mental disability is the basis for an extension following a notice of proposed termination, there must be a determination by a State or federal agency that the disability existed prior to age 19.

When is this bill likely to go into effect?
While the bill still needs to pass in the New Jersey Assembly and then get signed into law by Governor Christie, floor amendments identical to the Senate floor amendments were adopted by the Assembly Judiciary Committee in January of 2015, which is a good sign that the bill may be moving forward. Even if passed, however, the bill will probably not be effective immediately. Current language provides for a one year delay in effectiveness following the enactment. This delay would allow time for implementation of the necessary procedures by DHS and the courts. The bill provides that if a child support order is administered by the Probation Division, both parents must be sent two notices of proposed termination, the first at least 180 days prior to the child’s 19th birthday and the second at least 90 days prior.

Want to know more about how this new bill could affect your child support order should it become law? Have other questions about child support? Our attorneys can help. Please contact us to schedule your initial consultation.

Court Rules Pocket Dialed Phone Calls May Be Fair Game For Divorce Evidence Divorcing A Narcissist: 5 Steps To Protect Yourself