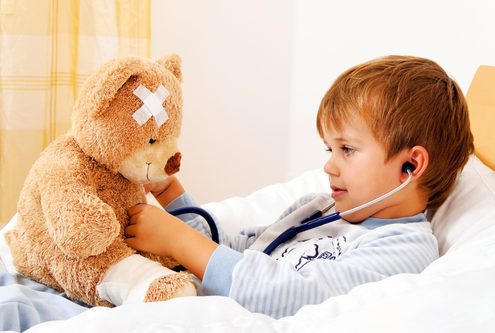 When divorced parents with joint legal custody disagree on decisions made in their child’s medical care, who gets the final say? A new case in Ocean County ended with a court order to exercise “parens patriae jurisdiction.” Find out what this means – and learn which parent was finally able to make a decision over whether their son should have surgery…

In the recent unpublished opinion of M.T. v. D. T., Judge Lawrence Jones of the Superior Court of Ocean County reviewed a situation where parents with joint legal child custody of a 16-year-old were unable to reach agreement regarding surgery for the child. The teenager was primarily living with his father when he suffered a sport-related injury to his arm and elbow. The father took the son to several medical appointments, and then, following medical advice, arranged for follow-up surgery. The mother was not consulted before the surgery was scheduled, and she objected when she learned about it. This ultimately led to a court appearance, cancellation of the initially scheduled surgery, and a second opinion from a surgeon of the mother’s choosing. Unfortunately, things did not clear up from there, as the mother then wanted the surgery to proceed, but with the surgeon she had chosen, rather than the surgeon chosen by the father. The father, however, insisted on rescheduling with the original surgeon.

In spite of the fact that both surgeons were apparently completely competent and had recommended only slightly different procedures, the parents’ continuing lack of agreement led them back to court. As the judge noted, this did not serve the child’s best interests, as the indisputably necessary surgery was now simply not happening. The judge also pointed out that if the parents had operated as capable and reasonable joint custodians, before running to court they could have arranged a joint phone conference with each surgeon to try to alleviate their concerns and reach agreement. Instead, the father filed an emergency application and order to show cause requesting that he be granted full legal custody on the basis that the mother was delaying the child’s medical treatment.

In an effort to resolve the matter without interfering with the current child custody order, the judge asked the parties to arrange for their respective proposed surgeons to appear by telephone, explain their differences in approach, and answer questions. They did so, and the judge concluded from this medical testimony that the differences in recommended treatment were within the scope of valid professional discretion, with neither approach being objectively discernable as “right” or “wrong.” Nevertheless, the parents were still unable to agree. The court therefore went on to address the father’s request for full legal custody.

In his analysis, Judge Jones described the New Jersey policy favoring joint legal custody. In a usual case, he observed, under the New Jersey custody statute (N.J.S.A. 9:2-4), both parent’s begin with an equal right to make major decisions concerning a child’s health, education and welfare. Nevertheless, he pointed out, this arrangement is often not feasible, due to the unfortunate fact that many parents come out of acrimonious divorce proceedings with exactly the type of relationship that appeared to exist in this case. While both parents obviously loved their child, it was clear from their demeanor and body language that they neither trusted nor respected each other. The court then observed that while the statute allowed transfer of sole legal custody to either party, it also authorized “any other custody arrangement as the court may determine to be in the best interests of the child.” (N.J.S.A. 9:2-4(c).

Before rendering a final decision, Judge Jones spent a great deal of time discussing the importance of parents being able to work together in joint legal custody situations. If they cannot do this, he observed, there is a risk that many child-related professionals—not just surgeons, but also dentists, teachers, tutors, coaches, and even baby sitters—who are simply trying to do their jobs and provide children with important services, will somehow end up in the middle of litigation between divorced parents in family court. It is hardly in a child’s “best interests,” he noted, to let warring joint custodians scare off valuable professionals who find that the whole family dynamic is too troublesome and aggravating.

A Warning and a Temporary Solution

The court’s long analysis was clearly intended to caution both parents in this case that unless they could improve their abilities to cooperate as custodians for the good of their child, either of them would be at risk of losing their decision-making rights. For the purposes of allowing resolution of the present situation, however, the judge chose to exercise “parens patriae jurisdiction” and craft his own hybrid child custody order. He granted the father temporary legal authority over the child’s immediate medical and surgical needs relative to his arm and elbow injury, leaving joint legal custody otherwise intact.
The clear take-away for parents with joint legal custody? Stop and think before running to court. Medical decisions that have the potential to impact a child’s life in a major way are often difficult, sometimes heart-wrenchingly so. Nevertheless, in most cases, your child’s interests will be best served by a spirit of openness and cooperation—and parents who are unable to cooperate with one another risk losing their option to do so.

Do you have questions about joint legal custody, or which custody arrangement best meets your family’s needs? We can help. Please contact us today to schedule your initial attorney consultation.

What Child Custody Option is Right for You?

Divorced Parents: Are You Required To Pay Your Child’s Grad School Tu...

Divorcing A Narcissist: Tips, Tools, And What To Expect