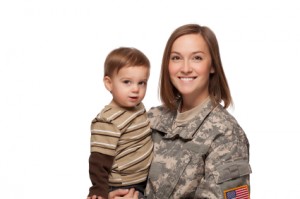 As we discuss at greater length in our Guide to Military Divorce, child custody arrangements and parenting plans require special flexibility when one or both parents are in the service of the U.S. military. Deployments can be unpredictable and sometimes involve short notice. Families are called on to make difficult adjustments. No parent should have to worry that serving the country carries a risk of losing custody or parenting time. In recent years, many states have addressed these challenges by enacting specific laws addressing custody arrangements for children with a parent in the military. New Jersey has now joined this growing group of states.

On January 25, 2013, Governor Christie signed into law New Jersey Senate Bill 1051 that essentially prevents courts from making permanent child custody decisions while a parent is on active military duty. The bill, also referred to as the Connors-Rumpf-Gove bill, provides that courts must wait until at least 90 days after a deployment ends before entering permanent child custody orders in a case or making permanent changes to any custody and parenting time orders that exist when the parent is called into active duty. In addition, a non-deploying parent cannot base a request for a change in custody or parenting time solely on a deploying parent’s absence due to military service.

Parents who will be unable to appear personally or fully participate in a custody or parenting time hearing or evaluative process due to deployment and wish to have a matter settled before they deploy can request an expedited hearing date without waiving any protections afforded by the Servicemembers’ Civil Relief Act (such as the right to request a delay or “stay” of proceedings during the period of deployment).

Other highlights of the bill include increased protections for servicemembers in cases where courts make temporary changes to custody and parenting orders during deployment. Temporary modifications must allow the deploying parent to exercise custody or parenting time during periods of leave and must expire automatically when the deploying parent returns. The original orders will then go back into effect unless the non-deploying parent can demonstrate that this is against the child’s best interests.

A deploying parent will also have options, in appropriate cases, to delegate parenting time during deployment to a designated person who has a close personal relationship with both the parent and the child, and to present testimony and evidence in custody and parenting time matters by electronic means (via telephone, video conference or internet). Even if a temporary modification provides that a child will be living out of state, New Jersey will retain home state jurisdiction.

If either you or your child’s other parent is in the military, you know how important it is to protect your rights and the rights of your minor children during times involving upheaval and stress. This law will provide much needed clarity and guidance for both deploying and non-deploying parents in New Jersey.