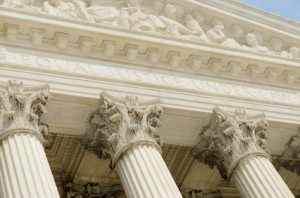 In a move that is almost certain to be historic, the U.S. Supreme Court on Friday signaled that it is ready to take on the two-decade legal battle over same-sex marriage. The 12-justice panel agreed to hear cases from Michigan, Kentucky, Ohio and Tennessee, where state officials are defending laws that limit marriage to a man and a woman. The court will hear arguments in April; a decision is expected by the end of June.

The same-sex marriage debate is one that has ignited passion on both sides, and this latest development has led to many questions about what could change for couples across the nation, including how this could potentially affect gay and lesbian couples who married in New Jersey. To help clear up any potential confusion, here are some answers to questions we’re hearing people ask.

Q: We are a gay couple who married in New Jersey last year. How could the Supreme Court ruling affect us?

A:  If we look at the petitions made by the plaintiffs and the questions the Supreme Court has requested plaintiffs to answer in April, it appears that the Court is wavering between two courses of action: make a ruling that gay marriage should be legalized nationwide OR decide that same-sex marriage continued to be handled by individual states. Bottom line: Because New Jersey has already legalized same-sex marriage, married same-sex couples who reside in New Jersey should not be worried that the Supreme Court could rule to invalidate their marriage (whether they are in a marriage or civil union). This is not in the scope of the case that will be before the justices.

Q: We got married in New Jersey, but moved a few months ago to Ohio, a state that doesn’t recognize our marriage license. How could this Supreme Court ruling affect our situation?

A: It is precisely the situation you find yourself in that has spurred the Supreme Court to take on this matter. Since gay marriage first became legal in some states, there has been considerable confusion and legal wrangling over the issue of what happens to same-sex couples who marry in a state where same-sex marriage is legal (like New Jersey), but reside or move to a state where it remains illegal (i.e., Ohio).

Are states required to recognize these marriages? According to the petition to the U.S. Supreme Court, the majority of plaintiffs requesting the review are not single individuals fighting for the right to obtain a marriage license. Rather, most plaintiffs are couples who legally married out of sate and who now want to be recognized as legally married by their home state. Some of the issues detailed in their cases involve discrimination and hardship in regards to child custody and adoption matters [related to the non-recognition of their marital status].

In hearing petitions, the justices will listen to arguments in answer to these two questions:

If the Supreme Court answers “yes” in its opinion to the second question, states including Ohio, Kentucky, and Tennessee, will need to reverse their policies and acknowledge legal out-of-state gay marriages as valid. In that case, the problem of having your New Jersey marriage recognized in a different state (Ohio or any other state) should be resolved.

Q: Do these differences in same-sex marriage laws between states affect divorce?

A: Yes, in matters of divorce, a particularly vivid example of what can happen to a same-sex couple living in a state that refuses to recognize gay marriage took place in Florida where a same-sex couple attempted to divorce, but was denied due to Florida’s same-sex marriage ban. The pair was essentially “wed-locked” until this past December when a deal was finally brokered to grant a divorce in the matter; same-sex marriage was legalized in Florida in January 2015.

We hope this helps to clarify the issues before the Supreme Court. If you have any questions about same-sex marriage or divorce in New Jersey, whether you married here or in a different state, please contact us to schedule an initial attorney consultation and get the answers you need.