Because it’s part of their nature to become entrenched in polarized positions and view others a threat — narcissists  know how to make a good divorce go bad. And in situations where both spouses have narcissistic tendencies, divorce can go from bad to horrible for all involved, especially the narcissists’ children.

Let’s take a “worst case scenario” view of the dangers of a narcissist vs. narcissist divorce. Here’s Sterling and Savannah story. What could they do differently?

Sterling, a wealthy venture capitalist, didn’t exactly date supermodel Savannah; he “acquired” her because she was top-notch arm candy he could parade in front of his business associates. Savannah didn’t exactly love Sam; she saw him as a ticket to a lifestyle that was even swankier than the one afforded her by her career. The high of being together was so potent that they got married six months after they met.

When their beautiful son Jake was born a year later, the perfect couple became a perfect family. Gradually, however, Jake’s smile came to mean more than the smile they got from each other. Sam and Savannah turned into rivals competing for their son’s unconditional love and devotion.

Because Sam and Savannah mistook the high of infatuation with true partnership, they never took the time to find out if their values were in line before they married. But there’s nothing like a child to make you realize what’s important to you.

Sam, formerly a non-practicing Jew, announces that Jake must be brought up in the Jewish faith. Savannah says she wants Jake to be raised a Buddhist. Sam insists that “his” son attend his alma mater: a traditional private school and a “feeder” to the Ivy Leagues. Savannah is convinced that a rigid academic environment will crush Jake’s spirit and wants him to get a progressive education with less structure.

The thought of Jake not being a reflection of themselves is more than Sam and Savannah’s fragile narcissist egos can bear. They are no longer mere rivals; they are archenemies that believe life would be perfect if they could just the other one out of the picture.

Savannah takes up with Clive, a sexy, single-dad musician she meets in the neighborhood playgroup. Clive also happens to be a Buddhist whose daughter is on the waiting list of the same progressive preschool that Savannah has chosen. The two of them dream about the idyllic life they will have, raising their children, hanging out with other artsy preschool parents, and living in Clive’s sprawling converted farmhouse in the country. Now that she’s found her “true” soulmate, Savannah decides it’s time to leave her husband, who no longer serves a purpose.

The Lawyering Up Phase

Savannah hires a “pit bull” attorney who’s famous for his scorched-earth approach to marital dissolution. Savannah starts the divorce off with a bang by serving Sam with divorce papers while he’s at an important business meeting.

Sam is furious that Savannah beat him to the punch, embarrassing him in front of his business associates in the process. He antes up by hiring his own “shark” attorney and filing an order for sole custody of Jake. Sam accuses Savannah of being an irresponsible, mentally ill alcoholic (she takes antidepressants and drinks a glass of wine with dinner) who’s unfit to raise a child. Savannah counters, stating that she should have sole custody of Jake because Sam works 24/7 and will just hand Jake over to a succession of nannies.

Sam and Savannah arrive at their court-ordered mediation session flanked by their attorneys. Sam announces that he is putting a nursery in his office so he can take Jake to work. Savannah counters by saying that Sam is too busy watching cyberporn and carousing with hookers on his lunch hour to spend any quality time with Jake. (She has no proof of this, but she’s sure it’s highly likely.) She also insists that Jake’s last name be legally changed to a hyphenate incorporating both parents’ surnames. Sam, Savannah, and both attorneys start screaming at each other, and over the mediator. The ill-fated mediation session ends abruptly.

A custody evaluator is retained to determine the custody arrangement. Against her attorney’s advice, Savannah moves in with Clive and his daughter during this time. The evaluator determines that Savannah is not an alcoholic, but discovers that Clive has been in seven rehabs. Exposing Jake to a live-in partner with a history of substance abuse puts Savannah’s judgment in question. Her attorney is furious with her for not providing him with this information and fires her.

Following her new attorney’s advice, Savannah rents an apartment close to Sam. The stress of the custody battle gets to her, and she falls into a clinical depression. The evaluator is concerned that her mental health issues are significant enough to impair her parenting and recommends that Sam get full physical custody while Savannah receives mental health treatment and is allowed supervised visitation with Jake.

Jake develops crippling separation anxiety, clinging to Savannah’s legs when Sam arrives for pick-up. Sam believes that Jake will “get over it,” and accuses Savannah of trying to turn him against Jake. Savannah believes that Sam is emotionally abusive and Jake’s reaction is proof of that.

Having completed her mental health treatment, Savannah files for a custody modification. Asking for sole custody, she states that Jake is in emotional distress at Sam’s home and Sam is insensitive to his needs. Sam accuses Savannah of parental alienation, stating that he should have sole custody.

Even with a clear division of parenting responsibilities, Sam and Savannah continue to squabble over everything, often in front of Jake. As the years go by, Jake can never figure out whom to trust and channels his frustration into playing on his computer. Soon, he’s designing his own software and eventually makes an app that gets a lot of buzz.

With seed money from investors, Jake earns enough money to live on his own. At 16, he goes to court to legally emancipate himself from both parents, requesting to be released from a war zone. The judge grants his request, seeing that Jack is self-supporting and able to make decisions on his own. And for his first emancipated adult decision, Jake changes his name. Jake Leibowitz-O’Hara is gone, but Jake Freedom is here to stay.

Before Your Own War Begins

Do these personality types or choices at all ring true to you? Before your own divorce devolves into a worst case scenario, get help by meeting with an attorney with your — and your children’s — best interests at heart.

We can help. For a confidential assessment of your matter, contact us to schedule your attorney consultation. Our knowledgeable attorneys have the skill and experience needed to get you through your matter with your relationships with your children and your dignity intact. Secure your future. Call us today: 888-888-0919.

Custody Battles: How Bad Could It Get?

Divorcing a Narcissist: Tips, Tools, and What to Expect 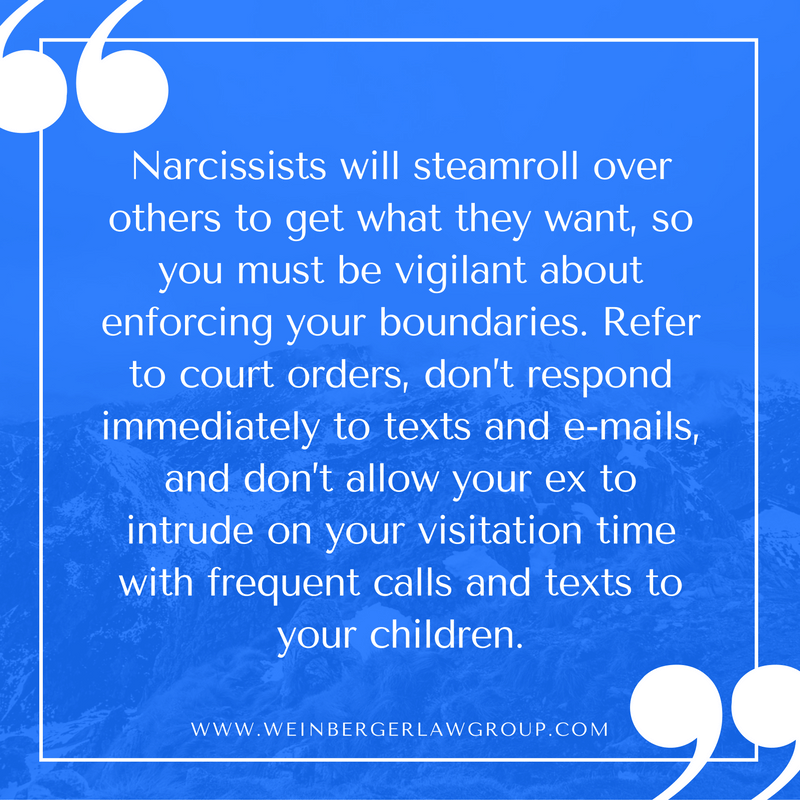 How To File For Divorce – Free Webinar

First Holiday After Divorce: 8 Tips For Surviving It Solo