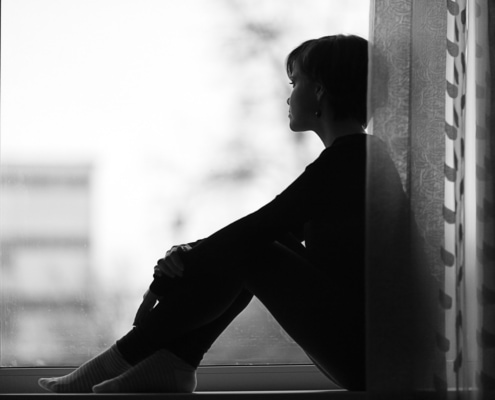 New Jersey recently passed a law elevating strangulation from a third to a second degree crime in the state. As Bari Weinberger wrote in her recent New Jersey Law Journal article, “Strangulation: How The ‘Rough Sex’ Defense Doesn’t Wash in DV Cases,” while this new law is an important step in the right direction, there’s more work to be done to bring justice to victims of strangulation.

Do you have a friend or loved one who you suspect may be a victims of domestic violence strangulation? Here’s how to get them the help they need.

Strangulation may or may not leave obvious neck lesions. Lack of an outward sign contributes to some victims feeling like they won’t be believed if they go to the police.

Here’s what victims need to know: Strangulation creates many other signs and symptoms that law enforcement and domestic violence agencies are trained to recognize.

Symptoms of strangulation include:

A victim of strangulation should seek out a medical exam that documents any of the above list, as well as other strangulation-related injuries or injuries related to other forms of domestic violence assault (i.e., bruises on other parts of the body).

Legally, there is precedent for consensual rough sex to be used as a defense, dating back to the Robert Chambers “preppie murder” in New York City in the late 1980s. If you are old enough to recall, Robert Chambers and Jennifer Levin had been dating casually when police found Levin strangled in Central Park after the couple went for a late-night walk. At trial, Chambers argued that Levin’s death occurred accidentally during consensual rough sex. The argument convinced the prosecution to accept a plea of manslaughter rather than gamble on a murder conviction. Other defendants soon adopted the defense, often with similar results.

In cases where strangulation is part of a domestic violence case, the consensual rough sex defense may be included to reduce the severity of the charges.

How can victims overcome a wrongful defensive claim? Document, document, document. Victims should write out detailed accounts of the strangulation. Support may be needed for this emotionally heavy task; talking to a counselor who records and transcribes the account may be helpful. What victims need to know: Writing out descriptions of abusive events and actions in the relationship presents a fuller and more accurate picture to the courts. As they saying goes, lies wither in the light of the truth.

Strangulation is a crime of physical assault, one of the 19 crimes of domestic violence recognized in New Jersey. As a second degree crime in the state, strangulation carries criminal penalties including imprisonment.

Strangulation in domestic violence situations virtually never exists in a vacuum. There are typically other forms of abuse and violence taking place in the relationship:

It can help victims to work through each of these areas to describe and document which issues have shown up in their relationship and how. For example, victims may not understand that withholding of income is identified as financial abuse. This process may also best be accomplished with the support of a therapist, domestic violence counselor or family law attorney.

Manipulation and control are devastating to the human psyche and victims often have an extremely difficult time making that first step. Friends and family members can help their loved one make a safety plan for leaving their abuser and connect with domestic violence support resources.

We have free support resources including detailed steps on how to obtain protection in domestic violence situations. Please use these helping resources to safeguard you or your loved one’s physical and emotional health.

Learn How To File For A Temporary Restraining Order (TRO)

Download our free e-book: Help for Victims of Domestic Violence in New Jersey