You are here: Home1 / Blog2 / New Jersey Law - Divorce & Separation3 / Spying on Your Spouse During Divorce: How Far is Too Far? 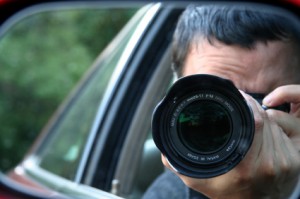 Once accessible mainly to law enforcement or private investigators, surveillance technology has become cheaper and easier-to-use. And as a result, according to an investigative report by the Wall Street Journal, it’s turning modern divorce into a spying free-for-all as spouses increasingly turn to monitoring devices to obtain evidence of affairs and other marital wrongdoings.

How many spouses are secretly spying? If you look at the booming business of many spy gear companies, the answer is simply, a lot. One maker of micro GPS trackers that can be placed in a bag or clothing says its business has almost doubled each of the past three years. Another manufacturer estimates that so far in 2012 it has sold about 15,000 of the devices, some of which magnetically attach to cars completely unbeknownst to the driver. Sales of “nanny cams” and hidden cameras are up 40 percent this year, reports SpygearGadgets.com.

But putting the ethics of spying aside, is all this snooping by spouses even legal? The concept of “inter-spousal spying” seems to fall into a gray area when interpreting privacy laws because not all courts agree on what constitutes a “reasonable expectation of privacy” in a marriage. Furthermore, it is far from settled whether evidence discovered this way is even admissible in a divorce proceeding.

Consider these three cases highlighted by the WSJ:

– In 2011, a Nebraska women who embedded a listening device in her daughter’s teddy bear to record the girl’s father was found guilty of violating the Federal Wiretap Act.

– In 2008, an Iowa court found that a man had violated his wife’s privacy by videotaping her with a camera surreptitiously installed in an alarm clock in her bedroom in their home.

– In October 2010, however, a federal judge in Texas ruled against a woman who sued her former husband over allegations that he had put spyware on a computer she used and placed a recording device in the family home before he moved out. Because they weren’t divorced yet, it was decided that the Federal Wiretap Act didn’t apply to “interspousal wiretaps.”

Concerned that your spouse may be spying? Here are some steps to stay surveillance-free:

Check Your Computer: Many spyware programs are downloaded directly from software websites. Browse through your computer’s downloads folder and applications folder for anything new or unusual. If you have real reason to suspect your privacy has been compromised, and you can afford it, you may want to consider getting a new laptop.

Delete Suspicious Smartphone Apps: Have screen after screen of smartphone apps? Go through and delete any that you don’t use. Check your account to see recent apps installed.

Sweep the House: Browse the internet for photos of hidden video monitoring devices, especially the infamous teddy bear “nanny cam”, in order to get a feel for what you are looking for. Remote cameras tend to be installed near entry doors to the house and near or in bedrooms. Look for furniture or home decor items that have been recently moved or are new. Follow all plugged in cords to see what they are attached to.

Clean the Car: Small GPS monitoring devices for cars that are magnetized can be attached to the underside of the vehicle or under the hood. Other devices may be slipped under the seats. If you are concerned, have a mechanic look the car over, and then give it a good cleaning and vacuum to make sure no crevice is missed.

Lastly, there is a big difference between hurt spouses snooping for as much dirt as they can turn up — and stalking. If your spouse is using surveillance as a way to control, harass or intimidate you, get help immediately. In this kind of situation, a person may face prosecution for stalking or related offenses, and a restraining order may be put in place.

“Stalking laws differ by state, but usually the main element is that there is fear” felt by the victim, Cindy Southworth of the National Network to End Domestic Violence, tells the Wall Street Journal.

Are you using spy gear to track your spouse? Think it’s your spouse who is doing the spying? How far is too far?

More Cohabiting Couples In Court After Breaking Up Foul Ball! A Case Study on Understated Assets During Divorce: McCourt vs. M...