You are here: Home1 / Blog2 / New Jersey Child & Parenting Issues3 / How To Raise A Secure Child – Even In A Bad Divorce 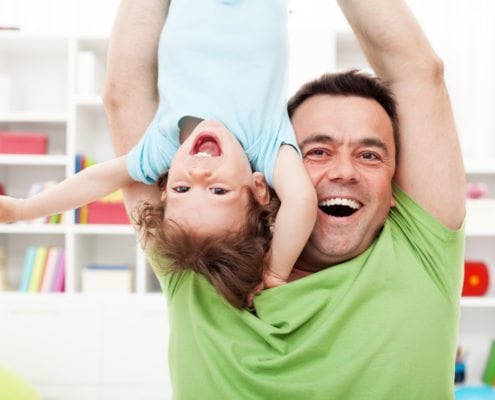 When not handled well, divorce can make it difficult for children to achieve the most important goal of childhood: feeling securely attached to their caregivers. That doesn’t mean this goal can’t be achieved, but it does require that divorced parents be vigilant about providing reassurance and consistency in their children’s lives – especially in situations where one parent is minimally involved. How can you help your child form healthy attachments? Read on for important information every divorcing parent should know…

In 1988, British psychologist John Bowlby published A Secure Base, a book on childhood development that introduced Attachment Theory. Bowlby’s findings came in part from an experiment called “The Strange Situation,” devised by his student Mary Ainsworth.

Ainsworth arranged for parents to drop off their toddlers at a pleasant laboratory setting filled with toys. The parents were instructed to say goodbye to their children, who were then allowed to play with toys and other kids until their parents returned. She observed the children’s reactions and behavior during the experiment and discovered four distinct attachment styles:

Secure Attachment – Securely attached toddlers sometimes cried and showed distress when their parents left, but were able to calm down and play with other children in their new environment. When their parents returned, they were happy to see them. Their behavior demonstrated that these children could rely on their parents and trust that they would come back. Their secure attachment enabled them not only to adjust to a new situation, but also to have fun in their parents’ absence.

Avoidant Attachment – These children had little to no reaction when their parents left. They weren’t interested in playing with toys or other children, and they didn’t seem to care when their parents returned. They had learned that they couldn’t trust their parents to meet their basic needs and coped by becoming overly independent.

Disorganized Attachment – These children showed the most extreme and inconsistent behavior. Distraught when their parents left, they clung to the strangers in their new environment. When their parents returned they appeared dazed, or gave off mixed messages such as simultaneously smiling and backing away. Why? They had grown up in chaotic environments, often with neglectful and abusive parents.

In garden-variety divorces, children will adjust to change and may even feel more secure because the fighting stops. They trust that both parents love them and will always be there for them, even though they’re not all living in the same house. Because they feel safe, they’re able to form stable relationships with friends, and later, romantic partners.

When parents engage in a high-conflict divorce, however, children remain anxious because the fighting never stops. They hear one or both parents bad-mouth the other and aren’t sure who to trust. This anxiety spills over onto their other relationships, which, like their parents’, are marked by chaos and drama.

In divorces where one parent is minimally involved or gradually disappears, children feel abandoned. They believe that something must be wrong with them for their parent to lose interest. Sometimes they experience a role reversal where they have to “parent” a parent who becomes emotionally unglued, or they take on too much responsibility in the household. Their childhood experiences cause them to expect little from other people, or feel suffocated in relationships.

In divorces where extreme parental alienation is present, kids can even become abusive towards the alienated parent. They mimic the alienating parent’s black-and-white thinking: “anyone who doesn’t agree with me is all bad.” If they don’t learn to think for themselves and form their own identity, they will either grow up to have high-drama relationships, or be unable to sustain a long-term partnership.

Tell them you will always love them and be there for them. This is the number-one thing kids want to hear when their parents divorce: that they’re safe and loved. You can’t control what your ex does, so don’t speak for them if they’re unreliable. But you can control what you do, and you don’t have to be perfect. If you’re consistent and available when your kids need you most of the time, they will be able to have healthy relationships because they grew up knowing they could count on you.

Acknowledge the problem. Don’t gaslight kids by pretending everything’s fine when it’s not; doing this will make them doubt their own reality. Say you realize how hard it is for them to feel conflict, abuse or abandonment. Tell them you’re doing your best to solve the problem, but don’t tell them “it will all get better” – because it might not. Naming the problem will validate their experience and show them you empathize.

Assure them that adult problems are not their fault. It’s common for children to feel they caused their parents’ divorce, and/or that they’re now responsible for their parents’ feelings. Explain that the divorce has nothing to do with them. Assure them that it’s your job as the adult to deal with adult problems. Tell them you’re trying to do this, although you might not be able to fix things. You want them to enjoy being a kid instead of feeling burdened by the fall-out of divorce.

Create a consistent routine. Even adults struggle with change, so imagine how hard it is for your kids! You can help them feel more secure by making their routine with you as consistent as possible. Kids need regular mealtimes (preferably with their caregivers) and bedtimes. They need to know what days they’ll be with Mom and what days they’ll be with Dad. Focus on creating stability and structure in your own home.

Pay child support in full and on time. Wreaking havoc with the other parent’s financial scenario hurts your kids. A parent who has to struggle to pay for rent and food is going to feel overwhelmed and have less energy to give the kids. Besides, do you really want your children to live with financial uncertainty when it’s not necessary? They don’t have to be rich, but they do need to know their basic needs will be met in order to feel secure.

Support your child’s relationship with your ex. Kids need to feel attached to both parents. Unless your ex is really unfit (not just according to you!), your child should have regular visitation and phone calls with that parent. And they should certainly not hear you bad-mouth your ex. Parental alienation is a form of emotional abuse and will damage your child’s ability to form healthy relationships later on. If you’re overwhelmed by rage and bitterness towards your ex, see a therapist to get help managing your feelings.

Children of divorce can and do grow up to have happy marriages. Divorce in itself is not the problem; unpredictability is. If children feel that their post-divorce life is stable – meaning they know what to expect, they get their needs met most of the time, and they can rely on at least one parent — they have a good chance to grow up feeling that the world is a safe place and available for healthy relationships.

Do you have questions about your custody arrangement or parenting time schedule, and how your child are being impacted? We can help. To speak with one of our highly skilled family law attorneys, please contact us today to schedule your confidential consultation.

High Conflict Divorce: 5 Things Your Therapist Can Do To Help

8 Ways To Get Out Of Your Divorce Funk