You are here: Home1 / Blog2 / New Jersey Civil Unions Domestic Partnerships3 / How To End A Civil Union in New Jersey 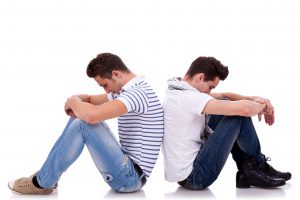 Almost a decade ago in October of 2006, the New Jersey Supreme Court ruled in the case Lewis v. Harris that banning same-sex couples from the rights and benefits of marriage violated the constitutional promise of equality. The Court gave the New Jersey Legislature a deadline of 180 days to correct the violation, which prompted the legislature to create the separate status of civil unions. Under New Jersey’s new law, a civil union was legally recognized union of two individuals of the same sex.

Today, of course, same-sex marriage is the law of the land in the US, but many couples are still in these civil unions . And, like any couple who experiences differences in their relationship and is choosing to end it, couples who are in civil unions need advice on how to dissolve their civil unions.

In other words, in dissolving a civil union, partners are entitled to seek and be given spousal support, child support, custody and an equitable division of property that was gotten during the civil union, just as if the couple was legally married. Questions still arise as to how to determine length of a civil union, because even if couples wished to become involved in a civil union, prior to 2007, this was not legally possible. If a couple acquired property and held themselves out as a legally recognized couple prior to 2006, some argue that the start of the union should be when the couple began living as a “legal” couple, not the actual ceremony date.

With regard to spousal support, also known as alimony, under existing civil union laws, a supported partner may be entitled to spousal support based on the life style that the parties enjoyed during the civil union. Like with equitable distribution, he issue arises when partners have been together as “married” prior to the enactment of the Civil Union Act. If a court were to look only at the exact language of the alimony statute, alimony will be based solely on the basis of the parties’ relationship from the start of the civil union to its end date and would not apply the time spent together, before.

Wading through divorce or dissolution laws that govern marriages and civil unions can be confusing and the process of filing the initial document through the entry of the final judgment by the court can be difficult for anyone to navigate. It’s always wise to consult a qualified family law attorney who is familiar with same-sex couples and civil unions here in New Jersey.

Have questions about terminating your civil union? We can help you start moving forward. Please contact us today to schedule your confidential consultation with one of our highly skilled family attorneys.

Grounds for Dissolution of Civil Unions in New Jersey