You are here: Home1 / Blog2 / Divorce - Family Law3 / I Want To Get Divorced But I’m Overwhelmed. Where Do I Start? 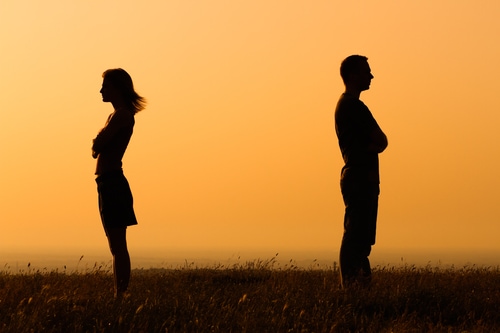 You’ve decided to end your marriage but feel paralyzed by the plethora of what seems like conflicting information. Plus, the emotional aspects of dividing assets and negotiating custody can make it hard to think clearly. Read on to learn how Robin, a 43-year-old nurse, did her research so she could proceed confidently with her divorce.

Robin, a 43-year-old nurse, decided she was done trying to save her marriage after she discovered her husband Blake had secretly reunited with his affair partner. Although she accepted that her fractured marriage was beyond repair, she had no idea how to commence the legal process of divorce or which approach was right for her circumstances: mediation, collaborative divorce, or litigation.

Robin spoke to her friend Sonia, who completed her divorce online, for a low cost. Sonia urged Robin not to do a DIY divorce. Sonia explained that online programs work best for people with uncomplicated situations like hers: minimal community property and no children. Sonia told Robin that her cousin Max regretted starting his divorce online. The forms were confusing, he and his wife began arguing over visitation, and ended up in court litigating custody. If they’d hired attorneys to begin with, they wouldn’t have wasted money on online fees.

Robin Shops Around For Attorneys

Robin spoke with Sonia’s cousin Max who advised her to get a consultation with at least two family law attorneys. He referred her to his own lawyer, Frank, who specialized in litigation. While Robin was prepared to negotiate hard for the custody schedule she wanted, she still hoped to avoid a trial. When she met with Frank in his luxurious high-rise office, she was concerned about his aggressive approach. He told her he believed mediation was a waste of time and advocated filing for full custody – even though Robin didn’t want full custody! — as a bargaining tool. Robin’s questions uncovered other concerns: Frank’s retainer was high and he was evasive when she asked him if she would be working primarily with him or with associates.

Instead of being uneasy, as she had with Frank, Robin immediately felt comfortable with Marcie, a divorce attorney who mediated 30% of her cases. Robin was impressed that Marcie tailored her approach to her clients’ needs, unlike Frank, who advocated flame-throwing no matter what the situation.

When Robin asked Marcie how to keep legal fees down, Marcie told her she could save money by drafting most of her paperwork, which Marcie would edit before sending. Marcie also advised her to be organized for meetings and phone calls: keep all her documents in one notebook; prepare questions and take notes; keep legal needs separate from emotional ones, i.e. vent to a therapist!

After retaining Marcie, Robin refined her divorce strategy. While she didn’t want to be overly-accommodating, she did want to start the process in a non-threatening manner. So instead of using a process server, she handed Blake divorce papers at home, when the children were out of the house. Blake wanted to mediate without attorneys to save money, but Robin felt that negotiating a financial and custody agreement would take more than the standard one-afternoon mediation. The couple settled on collaborative divorce so both could have attorneys present as well as a child custody specialist.

As a stipulation of the collaborative divorce process, Robin and Blake, as well as their two attorneys, signed “no court” agreements directing both lawyers to withdraw from the case if a settlement couldn’t be reached. Knowing they would have to forfeit the money they had already spent on legal fees and start anew motivated the couple to settle. She and Blake hammered out a custody agreement that incorporated the child psychologist’s suggestions for a step-up plan. Robin took a financial package that was less than she’d hoped, but given what she might have spent in a lengthy, acrimonious divorce, she realized she probably came out ahead.

Robin was pleased with the outcome of her collaborative divorce process. It was more expensive than mediation, but far less than what she would have spent in protracted negotiations. And settling in a non-adversarial fashion set the tone for an amicable co-parenting relationship.

The moral of the story? There is no one-size-fits-all when it comes to divorce. Take the time to figure out your needs, research your options, and find the attorney that’s right for you.

Have questions about your divorce? mediation? collaborative divorce? To speak with a family law attorney and learn about your rights and options, contact us to schedule an initial consultation. Secure your future and your peace of mind. Call us today at 888-888-0919 or click the button below. 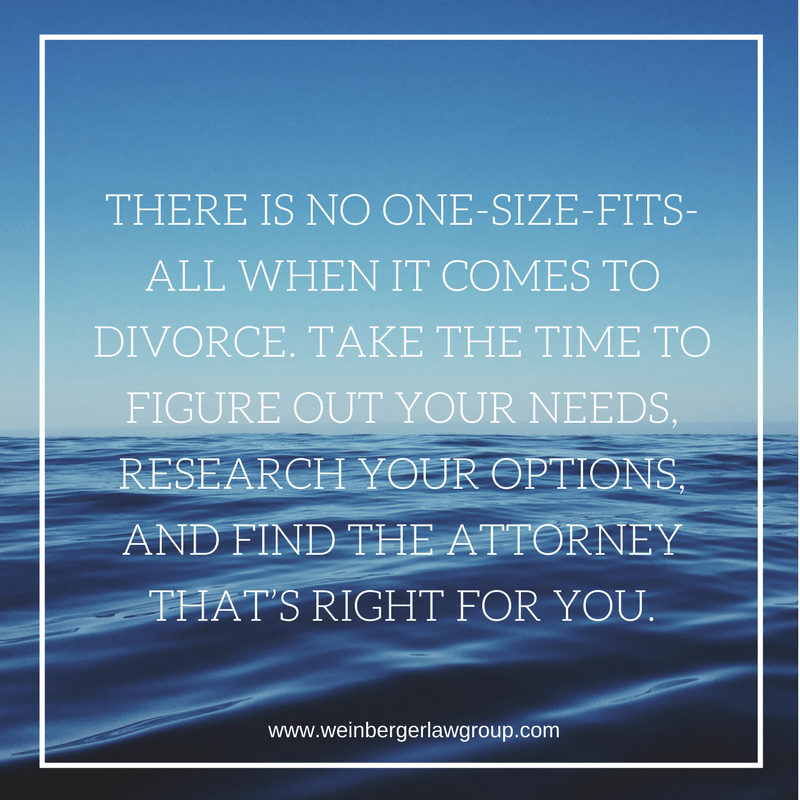