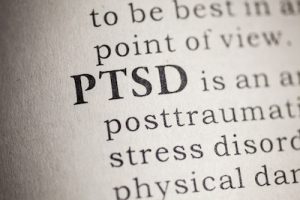 Many people don’t realize that the financial and psychological stress of a bad divorce, especially if it’s ongoing, can cause PTSD. Divorce PTSD goes unnoticed because the diagnosis –- post-traumatic stress disorder — is so closely linked to war veterans and those who have experienced tangible atrocities such as seeing people killed in a car accident or witnessing domestic violence. Because no one associates PTSD with divorce, those suffering from the condition often don’t get the help they need.

According to the NIMH, a person is diagnosed with PTSD if he or she has suffered each of the following symptoms for one month:

Acute Stress Disorder is diagnosed when symptoms go away within a few weeks. When they last longer, PTSD is the diagnosis. PTSD can also lead to substance abuse or process addictions (gambling, risky sex, compulsive eating) when people self-medicate to numb their symptoms.

Not everyone who goes through divorce will develop PTSD. But those with certain risk factors are particularly susceptible. Some of those factors include:

On the surface, Veronica’s life looked enviable: a handsome husband, two beautiful children, and a large home in an upscale neighborhood. Privately, however, Veronica’s narcissistic husband James criticized her relentlessly. Nothing she did was ever good enough, and he let their kids know she was a substandard mother (according to him).

James began an affair with a neighbor and filed for divorce. He didn’t work – Veronica had always been the primary breadwinner, earning a comfortable living as a real estate broker — but he didn’t have to; his new girlfriend was wealthy and supported him. She had never had children of her own, and took a special liking to Veronica’s. She liked them so much, in fact, that she convinced James to sue for custody. James then hired a shark attorney, courtesy of Veronica’s deep pockets, and proceeded to accuse Veronica of being an unfit mother.

Reading James’s slanderous, mostly fictitious account of her in his declarations, as well as his barrage of vitriolic e-mails, triggered Veronica’s memories of childhood trauma. Her alcoholic father had verbally abused her, and she had spent her life trying to overcome her feeling that she wasn’t good enough. Veronica’s father took James’s side in the divorce, a development that only compounded her sense of failure. But the worst blow was the damage to her relationship with her two children. James and his girlfriend relentlessly bad-mouthed Veronica and interfered with her attempts to put down rules in her own home. As the divorce wore on, the kids took James’s side and refused to visit Veronica, or when they did visit her, behaved badly.

Veronica began to buckle under the stress. She was plagued by nightmares and had a hard time sleeping. Her mind seemed stuck in a perpetual playback loop as she ruminated about awful things both James and her father had said to her over the years. She suffered crippling panic attacks every time she saw an email from James, or got a call from her attorney. She withdrew from her friends and neighbors, convinced that people thought she was the terrible mother James said she was. She was so stung by her children’s rejection that she stopped going to their school events and soccer matches for fear of being publicly ridiculed. Constantly on edge, the only way she could calm down was to spend hours binge-watching Law and Order episodes. Her once sunny demeanor darkened and she started losing clients.

When her income dropped, she could no longer afford her attorney. She didn’t have the psychological stamina to face James and his girlfriend in court, so she voluntarily gave him primary custody of the kids, which also meant she had to pay him child support. They sold their house and split the proceeds, much of which went to paying off her attorney. Veronica moved into an apartment, leaving only to go to the grocery store or work. Entire weekends would go by with Veronica glued to Netflix. It was the only way she could escape her reality. She knew something was wrong with her, but she didn’t suspect it was PTSD. She just thought she needed to deal with her divorce better.

How To Get Help

Veronica was right about one thing: she did need to deal with her divorce better, but she needed help in order to do that. She needed to learn how to re-train her mind and body’s response to stress through the following:

Medication. Psychotropic medication can often help ease the depression, anxiety, and obsessive thoughts caused by PTSD. Anyone suffering from those symptoms should consult with a medical professional.

Psychotherapy. Particular types of therapy have been shown to be particularly effective with PTSD. These involve cognitive restructuring such as CBT (cognitive behavioral therapy), which, as the name suggests, teaches clients how to change distorted thought processes. Somatic therapies such as EMDR (Eye Movement Desensitization Reprocessing) and Somatic Experiencing work on the body’s response to stress, teaching clients how to move out of their dysfunctional fight-freeze-flight reactions and access internal resources so they don’t buckle under stress.

Exercise. Regular vigorous exercise unleashes mood-enhancing endorphins in the body. Most psychiatrists recommend that patients exercise daily in addition to medication.
Simplify your routine. When you’re depressed and anxious, small tasks seem overwhelming. Stop worrying about keeping a spotless household or how quickly you’ve crossed items off your to-do list. Focus on what actually needs to happen in the present. You will find that a lot of the things you think are urgent can actually wait.

Support network. Isolation compounds depression. Take a walk with a friend. Talk to a clergyperson. If your social network has collapsed, think about joining a meet-up group that has nothing to do with divorce: hiking, museum-going, etc.

Be realistic. It will take time for your symptoms to ease. Try to set limits on the time you talk or think about your divorce. Ruminating on the past or worrying about the future won’t make anything better; but changing the way you react to your present circumstances will.

Are there legal issues related to your divorce that continue to cause you stress? Our attorneys can help. Please contact us to schedule a confidential consultation today. Your peace of mind matters.

How Do You Know It’s Time to See a Divorce Therapist?

High Conflict Divorce: 5 Things Your Therapist Can Do To Help 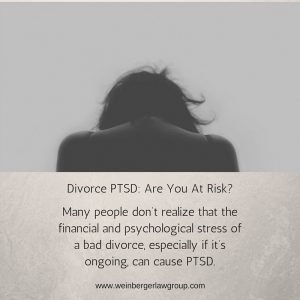 What You May Not Know About Prenuptial Agreements In New Jersey Cohabitation and Alimony in New Jersey: The Quinn Case