You are here: Home1 / Blog2 / Divorce - Family Law3 / Common Personalities In High-Conflict Divorce (And How To Handle Them) 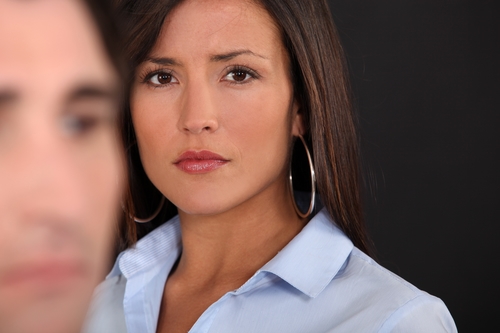 Certain personality types fuel acrimonious divorces. Because high-conflict people thrive on drama, it only takes one to turn divorce into a war zone. Does this sound like your former spouse? Read on for tips on how to cope with an antagonistic ex.

This is part 1 of our 2-part series on high conflict personalities in divorce. Find part 2 here: Tips from a Lawyer’s Perspective.

1. How Narcissism Develops. Although they appear supremely confident, narcissists are actually wounded individuals. Often the adult children of narcissistic parents, they felt shamed if they didn’t make Mom and Dad look good. Or they may have had a parent who over-identified with them, doting on them and treating them as if they were too special for rules. They interpret being treated as a regular person as an affront, and lash out. Either way, the narcissist grew up believing they are only as good as their attributes and achievements.

People with narcissistic personalities lack empathy. They are grandiose and prone to righteous rages if they feel they are not receiving appropriate admiration. They have poor boundaries and view others as extensions of themselves. Rules are for the little people, and narcissists see no problem in exploiting those around them to get their way.

2. How The Narcissist Reacts To Divorce. It doesn’t matter who initiated the divorce; narcissists see divorce as a shameful blight on their record and the loss of a “perfect” life. Because they can’t tolerate imperfection, they defend against their shame by blaming their ex for the divorce and anything that might go wrong with the children. Narcissists need a target of blame to keep their fragile egos in tact, so they will not “get over” divorce, or at least, not anytime soon. And don’t expect the narcissist to “put the children first.” Their children are extensions of themselves, and as such, the kids must hate the other parent as much as they do.

3. How To Handle Your Narcissist Ex. You must accept your ex’s fundamental personality. Narcissists are not interested in personal growth. Pointing out the error of their ways will just send them into a rage, causing them to lash out at you and treat you with contempt. Your goal is not to try to control your ex (good luck with that!), but to control how you interact with him. Here are some ways that you can do that:

1. How Borderline Personality Develops. People with borderline personalities grew up in invalidating environments. They have a history of feeling ignored or dismissed. Many of them suffered from ruptured attachments: loss of a parent or caregiver through adoption, death, or divorce. Frequently, people with borderline personalities were victims of abuse that was enabled or denied by the adults around them. The emotional instability they exhibit is often a trauma response from abandonment and abuse.

People with borderline personalities are terrified of abandonment, but are equally terrified of healthy attachment. They see the world in terms of black and white. If you like them, you’re wonderful, and if you don’t give them the validation they crave, you’re terrible. They can change moods in an instant, depending on the feedback they imagine they receive from others. This is one reason why being in a relationship with a borderline is so confusing: one minute they hate you, the next minute they don’t want you to leave. Children often feel the impact of having a BPD parent the most. [Read: Borderline Personality Disorder and Divorce: How To Create Stability For Kids]

2. How The Borderline Reacts To Divorce. Divorce triggers the borderline’s fear of abandonment. Their frequent, histrionic emails impugning your character are actually a way to hang on to you. They may co-opt the children to offset their feelings of loss. They’re terrified of being “left” by their children: they cause drama during transitions, interfere with your parenting time by calling and texting the children non-stop, or view you as a threat to the kids and try to get custody.

3. How To Handle Your Borderline Ex. Similar to the Narcissist ex, the Borderline ex is probably not going to “get over it” or “put the children first.” Whereas the narcissist sees you as threat to their self-image, the borderline sees you as threat to their very existence. Expect dramatic reactions to events that trigger abandonment fears: separations from children, the appearance of a new romantic partner, or any comment that feels invalidating. While you can’t control your borderline ex, you can do things to minimize conflict.

1. How The Helicopter Parent Develops. Helicopter parents are inherently anxious people. They may have experienced losses earlier in life, so they’re always waiting for the other shoe to drop. Or they were raised by controlling parents who expected perfection. Or they have obsessive tendencies and try to control their environment – especially their children’s environment — in order to calm down. Orchestrating their children’s lives defends against their fear of disconnection, but ultimately keeps the kids from developing self-agency. Helicopter Parents don’t exhibit the extreme behaviors that narcissists and borderlines do, but their intrusiveness can make divorced life much more complicated than it already is.

2. How The Helicopter Parent Reacts To Divorce. Everyone feels destabilized after divorce, but Helicopter Parents react by doubling their efforts to manage their children’s well-being. They worry that their ex is incapable of effective child-rearing and over-react to even the slightest parenting gaffe – or any parenting technique that is different from theirs. Their compulsion to manage their ex’s parenting creates conflict and can undermine the other parent’s authority in their own home.

3. How To Handle Your Helicopter Parent Ex. Understand that your Helicopter Ex is driven by anxiety. Their bossy, intrusive behavior is not really about you. It’s about their fear of losing influence over their children’s lives. Helicopter Parents have a hard time accepting that they will simply not be able to parent the way they’ve been used to parenting. Here are some ways to keep them from driving you nuts:

When you divorce a high-conflict personality type, certain legal strategies may be more beneficial than others to keep conflict to a minimum throughout the process. Have questions about divorce? child custody? asset division? and more? We can help. Please contact us to schedule your initial consultation with one of our compassionate attorneys. Why wait to feel peace of mind? Call today: 888-888-0919.

Divorce: Is Your Ex A High-Conflict Personality?

How To Deal With a High-Conflict Co-Parent Are Men Entitled To Alimony?

Home Alone? When Does Leaving You Kids Become Neglect?