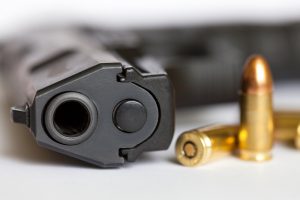 Today, the U.S. Supreme Court handed down a decision in the case of Voisine v. United States, a case that deals with domestic violence criminal convictions and gun possession. Already on the books is a federal law that prohibits those convicted of crimes involving domestic violence from owning or possessing firearms. Stephen Voisine and William Armstrong both pleaded guilty in state court (in their home state of Maine) to misdemeanor assaults on their domestic partners. Several years later, they were both charged with violating the federal law that prohibited them from possessing firearms and ammunition.

Both Voisine and Armstrong argued to the US Supreme Court that their state convictions of assaults did not automatically qualify as misdemeanor crimes of domestic violence because the state law provisions can be violated by conduct that is merely reckless rather than intentional. In other words, what if their behavior could have been seen as reckless, instead of purposeful, under the Federal law? The state law, (here, Maine), did include “reckless” behavior as part of misdemeanor domestic violence crimes. The federal law banning the possession of firearms did not include the term “reckless.”

When argued before the Court in February, this case prompted Justice Clarence Thomas, famously silent, to ask his first question during oral arguments in 10 years. At the time, he asked  whether “recklessness” is reason enough to warrant a “lifetime ban on possession of a gun, which, at least as of now, is a constitutional right.”
In a 6-2 decision, the US Supreme Court Justices did not side with Voisine and Armstrong. They stated, “Both men argued that they were not subject to §922(g)(9)’s prohibition because their prior convictions … could have been based on reckless, rather than knowing or intentional, conduct and thus did not quality as misdemeanor crimes of domestic violence.”

Six of the justices decided that “recklessness,” especially in the case of domestic violence, is far from unintentional, agreeing that reckless assault is indeed a misdemeanor crime, which blocks anyone convicted of domestic violence from buying a gun.

A “Deliberate Decision to Endanger Another”

The decision states, “Reckless conduct, which requires the conscious disregard of a known risk, is not an accident: It involves a deliberate decision to endanger another.” A reckless assault is assaulting someone with a conscious disregard of a known risk to that person. Knowing the risk and disregarding it. According to the Court, this is not accidentally assaulting your partner, it is a purposeful decision to harm that person, knowing and ignoring the risks to them.

The decision regarding guns and domestic violence by the US Supreme Court comes after much recent debate in the country regarding gun control, gun ownership and the Second Amendment. Most importantly, if you are in a violent situation, get help. If you are in danger, call the police. There are organizations that can help you and your family here in New Jersey. Call 1 (800) 572-SAFE (7233) for immediate assistance.

For help with your domestic violence matter in the family courts, including the pursuit of a temporary or final restraining order, please contact us to schedule your free confidential consultation with one of our skilled family law attorneys.

How to File for a Temporary Restraining Order