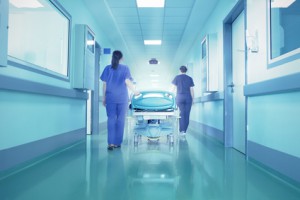 A new study published in the Journal of Health and Social Behavior has found that when wives take ill, marriages are more likely to end in divorce.

Whatever happened to “in sickness and health”? Researchers at Iowa State University looked at 2,701 couples over the age of 50 from the Health and Retirement Study, conducted between 1992 and 2010. They wanted to see if a diagnosis of cancer, heart problems, lung disease and/or stroke could potentially affect marital outcomes. And it did, but only for women: a wife’s major illness was associated with a 6 percent higher probability of subsequent divorce. Illness on the part of husbands in the study appeared to have no effect on divorce rates.

The findings, as can be expected, have led many media outlets to speculate about the  loyalty of some husbands to their ailing wives. Though the study did not delve into why these couples decided to divorce, reports have inferred that issues dividing couples may have been ones including the stress of one spouse acting as caregiver to the other and the financial stress that often accompanies long term illnesses and disease.

It’s this latter point that may be the most probable explanation, but perhaps not in the way most news stories are explaining it. Hospital and health insurance costs, payments for doctor visits and the price of therapies and treatments can run in the tens or even hundreds of thousands of dollars. To deal with expenses, a growing number of couples are getting divorced — but not because health care costs are causing tension in the marriage. Rather, divorce is becoming tool for couples attempting to safeguard their assets and gain assistance from Medicaid in paying for treatment costs.

Medicaid eligibility is based on strict criteria that many married couples are not able to meet. In some cases, even happily married spouses consider a “Medicaid divorce” as a possible route to help manage the financial burden of a serious health crisis.

How does it work? The basic idea is that by divorcing and dividing up joint assets, a couple can keep at least part of what they built together. Once divorced, the sick spouse spends down their portion of the assets to qualify for Medicaid. The healthy spouse keeps the remainder in his or her own name. Beyond that, little changes in the couple’s relationship: they continue to stay together, parent their children together, and take care of one another — it’s just that they’re both legally single, and only one of them is still financially solvent.

Of course, Medicaid divorce doesn’t necessarily explain away all the findings of the study. However, it certainly paints an issue that may seem black and white (older husbands leaving their sick wives) with some more nuanced shades of gray.

Would you ever consider Medicaid divorce? For further reading, see “The Medicaid Divorce: How Splitting Up (On Paper) May Protect Your Partnership.”

New Jersey Divorce Chronicles Part 4: Why “Coming out Swinging”... Trying to Modify Your Child Custody Plan? Here Are 3 Steps To Take Right No...