The New Jersey Supreme Court recently issued a decision in two consolidated cases, H.S.P. v. J.K. and K.G. v. M.S., clarifying the role of family courts in special immigration juvenile status (SIJS) cases. This opinion brings attention to the grave circumstances that can drive families to send their children on perilous journeys across international borders, and discusses the legal process involved in seeking one potential avenue for such children to establish legal residency in the United States. If you are the parent, relative, or friend of one of these children, this information may be of great value.

The Two-Step Process in SIJS
SIJS permits juveniles under 21 who have entered the United States illegally to obtain lawful permanent residency via a two-step process. The first step is application to a state family court for a determination that the juvenile meets certain statutory requirements. The second step is a petition to United States Citizenship and Immigration Services (USCIS) for a decision on the immigration status. Federal law (8 C.F.R. § 204.111) sets out the factual findings that a family court must make before USCIS will consider an SIJS application. Congress has revised the requirements several times. According to the American Bar Association’s Children’s Rights Litigation Section “the overarching principle guiding SIJS relief [is] to provide humanitarian relief to children who experienced abuse or neglect and are unable to safely return to their home countries.” Current requirements include a finding that the juvenile’s reunification with “1 or both” parents is not viable due to abuse, neglect, abandonment, or a similar basis under state law, and a finding that it would not be in the juvenile’s best interests to return to his or her home country.

The Trial Court and Appellate Division Decisions in H.S.P. v. J.K.
The juvenile applicant in H.S.P. v. J.K. was a teenage boy, M.S., from the home state of India. His father had left the family when M.S. was four years old. Two older siblings subsequently died, both at age 17. According to M.S., their deaths were due to malnourishment, unsanitary living conditions, the unavailability of medical care, and heart problems. Eventually M.S.’s mother, respondent J.K., became too ill to work. Consequently, at the age of 15, M.S. began working in construction for approximately 75 hours per week, resulting in severe health problems. Fearing for his life, his mother sent him to the U.S. to live with her brother, petitioner H.S.P. M.S. walked across the U.S. – Mexico border illegally in 2011.

H.S.P. was awarded temporary custody of M.S. and sought a New Jersey Family Part order regarding the SIJS statutory requirements. The court found insufficient evidence of abandonment by M.S.’s father, despite credible testimony that he was an alcoholic or a drug addict. The court further found that M.S. had not been abused, abandoned, or neglected by his mother, as she spoke to him weekly by phone and remained actively involved in his life.  Having found that reunification with his mother was viable, the court did not proceed to the question of whether or not it would be in M.S.’s best interest’s to return to his home country.

The Appellate Division reversed the findings of the trial court regarding M.S.’s father, noting that “a total disregard of parental duties” amounted to abandonment. Regarding M.S.’s mother, however, the court agreed that no abandonment had occurred. The court then interpreted the federal law to require findings that reunification was not viable with either parent, and therefore agreed with the trial court that proceeding to the best interest’s determination was unnecessary. This decision by the Appellate Division put New Jersey on one side of a developing split between states interpreting the revised federal requirements. More than one other state had previously interpreted the language to mean that abuse or abandonment preventing reunification with only one parent was sufficient.

The Trial Court Decision in K.G. v. M.S.
The juvenile applicants in K.G. v. M.S. were two teenage girls, J.S.G. and K.S.G., from the home state of El Salvador. Their mother, K.G., had separated from their father, M.S., in 2008 and moved to New Jersey, leaving the two girls in the care of M.S. and his mother. M.S. was murdered by a local gang in 2013, and subsequently the daughters and their grandmother received death threats, forcing them to abandon their home. The girls entered the United States shortly thereafter by crossing the U.S. – Mexico border. Removal proceedings were initiated after they were apprehended by immigration enforcement agents. The girls were temporarily released to their mother, who was awarded custody in New Jersey family court and simultaneously commenced a petition for SIJS relief.

The trial court found that reunification with the girl’s father was not viable because he was deceased, but that reunification with their mother, K.G., was viable. K.G. had not abused, neglected or abandoned the children, and on the contrary, had provided for them financially and remained involved in their lives after she moved to the United States. The court went on to find that it was not in the children’s best interests to return to El Salvador because there were no family members able to care for them there. Despite this finding, the court denied the children’s SIJS application, relying on the Appellate Division’s decision in H.S.P. that required findings that reunification was not viable with either parent.

K.G. appealed the case and her appeal was approved to move directly to the Supreme Court for consolidation with the H.S.P. case.

The New Jersey Supreme Court Opinion
The New Jersey Supreme Court reversed both of these cases and remanded them for new hearings in family court, determining that in neither case had the courts initially made sufficient findings under state law. The Court clarified that the Family Part’s responsibility is to make separate findings on each statutory requirement, including the viability of reunification with each parent, and the “best interests” determination. The Court also noted that in assessing the question of abandonment or neglect by the mother in H.S.P., the Appellate Division had incorrectly applied the law of India rather than the law of New Jersey. As the panel itself observed, sending a child to work for seventy-five hours a week in a dangerous activity constitutes abuse under New Jersey law, despite the fact that it might not contravene the laws of India.

Finally, the Court noted that in K.G., the trial court incorrectly implied that the Family Part had jurisdiction to usurp the issue of immigration status from the federal government, rather than confining itself strictly to the matter of providing USCIS with sufficient information to make the ultimate determination.

Interpreting the Supreme Court Opinion
Both of these cases involved two distinct issues. One was the purpose of SIJS. The other was the precise role of the state family courts.

With respect to the first issue, the Appellate Division court in H.S.P. interpreted the purpose of SIJS to be the prevention of a child’s return to a neglectful or abusive parent in the home country. Since the court believed that H.S.P.’s mother did not fit this profile, it concluded that granting such status was inappropriate. In the K.G. case, the trial court believed that SIJS was inappropriate when reunification with one parent was possible, regardless of whether or not that parent was currently in the home country.

A group of New Jersey law school professors specializing in family and immigration law appeared as amicus curiae (“friend of the court”) in this appeal. Also appearing as amici curiae were American Friends Service Committee, Kids in Need of Defense, and The Young Center for Immigrant Children’s Rights. Attorneys for these groups argued that the clear overarching intent of SIJS was to protect immigrant children who have been abused, neglected, or abandoned and cannot return safely to their home countries. They also pointed out that USCIS routinely grants SIJS petitions based on a state court’s determination that reunification with only one parent is not viable. In fact, a news release from Rutgers Law School regarding this case points out that federal immigration authorities have issued policy explicitly stating that “it is sufficient if reunification is not viable with only one parent; and that in fact the child can be living with a fit parent in this country.”

The New Jersey Supreme Court acknowledged the arguments regarding interpretation of federal law, but largely side-stepped them. Instead the Court confined itself squarely to the second issue: What exactly is the role of the state family courts in these cases? The Court clearly defined this role as the making of detailed factual findings on each element required to be addressed under federal law. Making findings regarding abuse, neglect or abandonment, as well as analyzing a child’s best interests, are functions uniquely within the expertise of the family courts. Family court orders regarding such matters provide the USCIS with the information necessary to make an SJIS determination. The state courts, however, have no role in interpreting the federal law or in “pre-screening” SIJS decisions.

Does your family law matter involve immigration or international child custody issues? Our experienced attorneys can help. Please contact us to schedule your confidential attorney consultation. 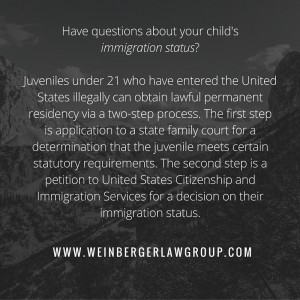 What Can A Divorce Therapist Do For You? 8 Ways To Protect Your Kids From The Fall-Out Of A High-Conflict Divorce