You are here: Home1 / Blog2 / New Jersey Child & Parenting Issues3 / Damage Control: How to Have a Child-Centered Divorce 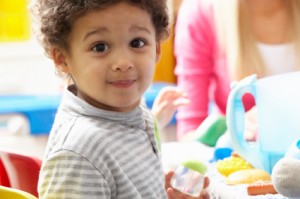 {Part 2 of our 2-part series on Children and Divorce.}

Divorce can be a tough life change — that’s a given. But when you have children, it is infinitely harder to come up with a divorce plan that makes the process as painless as possible for the kids.

One method, developed by Divorce Coach Rosalind Sedacca, CCT, is called “child-centered divorce.” The idea behind it is for parents to focus on helping the child cope with the painful transition from a two-parent household to “two-household parenting.” At its heart, child-centered divorce is about three things:
– Agreeing to act as partners when it comes to supporting your children and reassuring them that things will be okay;
– Clearly communicating to the children the message that this divorce is not about them — they didn’t cause it, they can’t fix it, and they aren’t to blame; and
– Ensuring that the children understand that while the changes divorce brings may be disconcerting or even scary, one thing won’t change: they’ll always have two parents who love them.

A child-centered divorce means you and your partner must negotiate several key steps. First, agree that this is what you want and that it takes priority over any personal disagreements you have. Second, develop a strategy for informing your children about the divorce and answering their questions — and that strategy must be neutral in nature. That means there can be no finger-pointing under any circumstances — cataloguing your spouse’s faults and failings in your child’s presence is forbidden. Even if you and your ex-to-be are at odds about everything else, if you want a child-centered divorce, you must set aside those differences and be united in this goal.

And finally, both parents must follow the golden rule of parenting during divorce: leave the kids out of it as much as possible. Even talking to your attorney about an upcoming court date in their presence contradicts the message that the divorce is not about them. Kids notice such contradictions — and they will lose faith in the messages you give them as a result. Whenever possible, avoid discussing the divorce with them unless they ask a direct question about it. Direct questions should be answered as truthfully as possible without entering into blaming; for example, if your son asks, “Is Dad’s new girlfriend the reason you split up?” it may be tempting to just say “Yes” — but that would go against the goals of child-centered divorce. Instead, answer, “There were a lot of problems in our marriage, and most of them had nothing to do with her.”

How you handle your divorce may have a profound effect on how your child relates to you in the future, so planning your process to minimize the harm may have tremendous rewards for you in the long run. We encourage parents to consider a process that focuses on children’s needs during divorce.

For more on the topic, read part 1 of our Children and Divorce series, Talking to Your Child About Divorce.

Heidi and Seal Divorce: Can a Post-Nuptial Agreement Be Challenged? Bling it on: Why you shouldn’t fight over valuables — and how to avoid the...