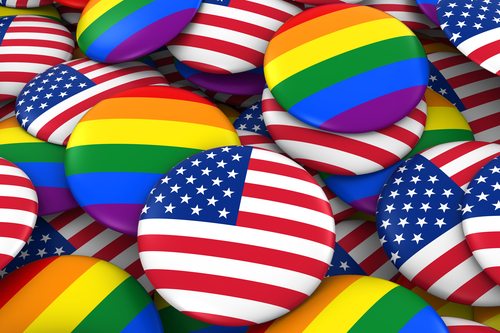 With Donald Trump’s surprise win in yesterday’s presidential election now sinking in, many in the LGBTQ community are asking: what does a Trump presidency mean for our rights? Given the fierce battle that has been waged in recent years to bring marriage equality to the United States, let’s take a look at the possibilities for what a Trump presidency could mean for key marriage and family issues for the gay community.

Background: After the Supreme Court’s historic 2015 ruling establishing marriage equality as the law of the land in the United States, Trump said the court had made its decision and, and despite disagreeing with the ruling, he did not support a constitutional amendment allowing states to “re-ban” gay marriage. Later in his presidential campaign, however, he back-tracked to say that he might appoint Supreme Court judges who could possibly overrule the SCOTUS’s decision. These mixed signals have resulted in many in the LGBTQ community feeling distrust and unease.

Something to think about: The road to nominating a Supreme Court Justice is a long and tangled one, and it is far from clear how same-sex marriage would even become an issue for SCOTUS to consider. Also, remember that neither Congress nor the President can overturn a Supreme Court decision except by constitutional amendment. Take a look at the path for ratifying new amendments. Without widespread support, an amendment simply has no chance. In 2016, more than 60 percent of American support marriage equality, which makes any progress of an amendment extremely doubtful.

In the months and years ahead, let us hold President Trump to what he professes he believes about LGBTQ people. After the Orlando shooting this past June he described the horrific mass killings as an “…assault on the ability of free people to live their lives, love who they want, and express their identity.” Let’s accept nothing less from Trump than to act in a way that upholds these ideals. Doing anything to jeopardize marriage equality is certainly not in keeping with this outlook. As a community, let’s remain vigilant.

Background: Yesterday’s Republican sweep of Congress places focus on Republican support for proposed legislation that protects private businesses from discrimination claims against gay people and same-sex couples. For example, Vice President-elect Mike Pence last year signed into law in his home state of Indiana, the Religious Freedom Restoration Act, a set of statutes that allows private businesses in Indiana to deny service to LGBT people on religious grounds. Trump reportedly had information on his website that once seemed to align with this thinking, but that has since been deleted. Trump’s current views on laws such as these is currently a gray area.

What you need to know now: In Pence’s Indiana, he has left the door open for some incredibly troubling situations. If a same-sex couple were to go through a private religious-affiliated adoption agency to adopt a child, could they be denied based on sexual or gender identity alone? This extremely misguided Indiana law seems ripe for constitutional challenge, and let’s hope that happens. In New Jersey, parenting and adoption laws are gender neutral, and we have absolutely no such law like what is currently on the books in Indiana. In New Jersey, our laws operate under the assumption that children deserve loving parents. Period.

Background: A hotly contested issue in North Carolina’s governor’s race this year was the state’s controversial HB2 bathroom law that discriminates against transgender people. Trump initially was against HB2: “North Carolina did something that was very strong and they’re paying a big price. There’s a lot of problems…you leave it the way it is…people go, they use the bathroom they feel is appropriate, there has been so little trouble…” During the Republican debates, he famously added that “Caitlyn Jenner is welcome to use whatever bathroom she wants in Trump Tower.” However, since then, he has affirmed support for state anti-transgender laws.

What you need to know now: Trump does not have a declared national policy on transgender issues, making it imperative for the voices of the transgender community to  engage the president-elect in a conversation about how he can truly begin to show, as he so often professes, that he respects the LGBTQ community. Where does he stand, and intend to stand, on matters such as the HB2 bathroom law? Yes, it is a state issue specific to North Carolina, but the transgendered people who live in North Carolina are Americans just like the rest of us.

Our country is certainly entering a new era, but it is one that is yet undefined. What remains unchanged is the foresight of our nation’s founders to provide checks and balances that prevent the president from having all-encompassing power.

As the Trump administration transition continues, we will keep a watchful eye on LGBTQ issues. As family law attorneys, we are especially dedicated to closely monitoring how any administration appointments and decisions could affect our LGBTQ clients. Please rest assured that we are forever vigilant to making sure your rights as spouses and parents and people are respected and protected by federal law, and by the laws of New Jersey.

Our goal with this “Trump and the LGBTQ” primer is to help you feel more in control. Knowledge is power! Do you have other concerns that you would like to see answered in our blog forum? Tweet us @weinbergerlaw or PM us on Facebook. To speak with an attorney for personalized feedback about a family law issue you may be experiencing, please contact us today to schedule your attorney consultation. We are here to help.

5 Things I Would Tell My Former Self About Co-Parenting Child Custody: 3 Things To Think About If Your Ex Plans To Move Out Of Stat...