You are here: Home1 / Blog2 / Divorce - Family Law3 / Divorce Shame: I’m The Only One In My Family Who’s Divorced Are you the first person in your family or group of friends to get divorced? If so, you may feel judged, criticized, and misunderstood. Even if your loved ones are supportive, you may feel that there’s something wrong with you because you’re “the only one.” Don’t get derailed by divorce shame! Read on to learn how stay-at-home mom Veronica let go of her false belief that getting divorce made her defective.

When Veronica called her parents to tell them she and her husband Jamie were splitting up, they were devastated. Doug and Lisa loved Jamie, who had been with Veronica since their freshman year in college. He was attractive, polite, career-minded, and responsible. Jamie made a good living as a computer programmer so Veronica was able to stay home after the birth of their daughter Lucy. They were the picture-perfect young family and there was never a hint of any trouble.

Doug and Lisa were traditionalists who struggled to accept Veronica’s reason for the divorce: she explained that she and Jamie were too young when they got together and had grown apart; they now wanted different things out of life. Doug and Lisa insisted that every young couple hit the same roadblock; the goal was to move through it and come out the other side together, not break up. They told Veronica her reason for ending the marriage was selfish, especially when there was a child to raise.

Veronica didn’t feel much better talking to her sister Alexandra, who had been married for 10 years and had three children. Alexandra questioned Veronica’s decision – perhaps it was the 7-year-itch? – and worried that she’d regret it.

Veronica internalized her family’s reactions to her divorce and started to believe she was damaged goods. She carried this sense of shame into mediation and ended up agreeing to less custody time than she wanted because she didn’t think she had permission to ask for it.

Financially, Veronica had to return to work full-time. She struggled to balance her professional and home life. She felt guilty for putting Lucy through the divorce and worried incessantly about the impact it would have on her daughter long-term. Because her guilt caused her to doubt her role as a parent, she often indulged Lucy’s whims and was an inconsistent disciplinarian. Her difficulty setting limits with Lucy impacted her co-parenting relationship; Jamie felt Veronica was undermining his authority by not enforcing agreed-upon rules.

A year after her divorce was final, Veronica still felt overwhelmed, isolated, and ashamed. She knew her family wouldn’t understand what she was dealing with. Her close friends were empathetic, but they were busy with their own families, which made Veronica feel even more alone.

After an entire weekend spent curled up with Netflix and ice cream, Veronica realized it was time to stop letting shame, and other people’s opinions, run her life. She researched different ways to process divorce and decided to invite her closest friends to a divorce closure ceremony.

Before the ceremony, Veronica wrote down the mistakes she made in her marriage, in her parenting, and in her co-parenting relationship with Jamie. At the ceremony, she read them aloud and then also stated, publicly, that she forgave herself. She then burned the letter, symbolizing letting go of the past.

Next, Veronica read a personal mission statement that detailed her values and goals for life moving forward. Her friends wrote wishes for her at the bottom of the statement.

Facing, and releasing, her divorce shame helped Veronica accept not only her own mistakes, but also those of her family. She realized her relatives’ criticism and judgment were masking their concern for her. She stopped inviting criticism by talking to them about her divorce. Working through shame brought Veronica out of isolation, strengthened her parenting role with Lucy, and improved her co-parenting relationship with her ex. What had once been the worst thing about her life – divorce – became the impetus for positive change and a new beginning.

We believe in divorce with dignity. To speak with a family law attorney and learn about your rights and options, contact us to schedule an initial consultation. Secure your future and your peace of mind. Call us today at 888-888-0919 or click the button below. 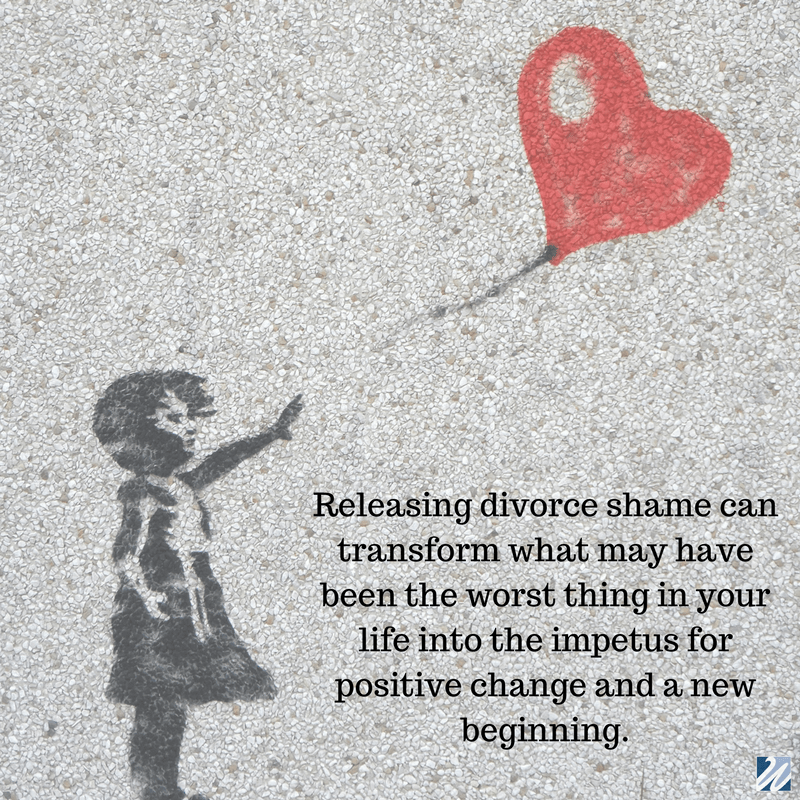 Stand Up For Abused and Neglected Children on GO BLUE for CASA Day!