Ms. Arabia-Meyer’s passion for family law is drawn from a very personal place: experiencing her parents’ own contentious divorce when she was a teen. Ms. Arabia-Meyer knew very early on that she wanted to practice family law as a way to directly help people going through some of life’s most difficult moments.

Recognizing the sensitive nature of family law issues and the high personal stakes involved, Ms. Arabia-Meyer is deeply committed to bringing her clients peace of mind, protection and renewed stability as she skillfully guides them in their legal matters. She listens carefully to her clients and asks probing questions to uncover their unique set of needs before crafting a clear strategy for reaching their goals. At every point in their matter, her clients can feel confident knowing they are informed of their rights and range of options.

Angela Arabia-Meyer focuses on creative out-of-the-box solutions to fully address her client’s concerns and obtain the best possible outcomes, whether through litigation or settlement, depending on what is in her client’s best interest. Ms. Arabia-Meyer is a zealous litigator with an esteemed reputation in the courts. She is also a trained mediator and will always explore alternative dispute resolution whenever appropriate. Her background and skill enable her to provide the specialized guidance her clients need to successfully navigate their legal issues in the most efficient and effective manner possible.

When there are children involved in a divorce, Ms. Arabia-Meyer moves swiftly to protect their well-being, understanding the dire consequences of a protracted custody battle firsthand. She offers clients with special needs children extensive experience with establishing beneficial custody arrangements that address the added health, medical and educational concerns. She is also highly skilled in matters related to guardianships and powers of attorney for children. 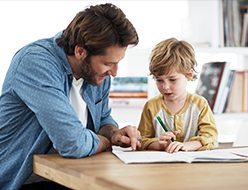 Ms. Arabia-Meyer has prior experience as a public interest attorney for over 16 years, litigating extensively in the areas of family, education, social security, housing, employment, and other civil law matters. This broader legal experience is a significant benefit to clients with family matters that overlap with these other aspects of law, including deciding divorce support amounts when one spouse is disabled and/or retired and receiving SSDI/SSI benefits.

Among her career accomplishments, Ms. Arabia-Meyer used her skill and talent to secure several noteworthy outcomes, including significant changes to Housing & Urban Development (HUD) policy that has nationwide applicability, strengthening the rights of tenants, particularly victims of domestic violence, in public housing. In her mission to “give voice to the voiceless,” she also developed and directed an innovative pro-bono program wherein private attorneys were trained in substantive law, such as family matters, and then were mentored during litigation, which enabled Legal Services to help clients that would have been turned away due to a lack of resources.

Ms. Arabia-Meyer received her Juris Doctor from Rutgers School of Law while at the same time running her own business and raising four kids under the age of five. She furthered her legal education by taking on additional courses so she could earn a Graduate Certificate in Conflict Management, also from Rutgers School of Law. While at Rutgers, she externed for the Honorable Peter E. Doyne, Presiding Civil Judge, Superior Court, Hackensack, where she prepared draft opinions for the court, an experience that provided her with valuable insight into key factors judges take into account when issuing rulings. This is knowledge she still utilizes to this day when preparing arguments.

Her research was featured in the article, “Supporting Families, Saving Funds: An Economic Analysis of Equality for Same- Sex Couples in New Jersey,” published in the Rutgers Journal of Law & Public Policy when she was Research Assistant for the esteemed Professor Suzanne Goldberg. The research addressed fiscal concerns relating to the Family Equality Act and its effects on LGBTQIA+ families. Additionally, Ms. Arabia-Meyer was a member of The Rutgers Conflict Resolution Law Journal, where she authored a Note, Matrimonial Early Settlement Panels in New Jersey: A Historical Analysis and Litigant Reactions to Current Practice, providing the New Jersey legal community with a greater understanding of MSA best practices.

After graduation, she clerked for the Honorable Edward V. Gannon in Superior Court, Paterson, where she conducted extensive legal research and wrote memoranda of law on questions of law raised during trial, further deepening her understanding of litigation. Ms. Arabia-Meyer was also a volunteer mediator in Paterson Small Claims Court and Landlord/Tenant Court where she sharpened her conflict management skills while helping parties in dispute reach mutually satisfying resolutions.

Ms. Arabia-Meyer resides in Bergen County with her husband and three children. She and her husband enjoy visiting them at their respective schools, the eldest daughter, a graduate student at Virginia Commonwealth University, and their two boys, the elder at Paul Smith’s College in the Adirondacks, New York, and the youngest at Rutgers University here in New Jersey. On most fall weekends, you will find Ms. Arabia-Meyer in New Brunswick cheering on Rutgers football.

Schedule a Consultation with Angela Arabia-Meyer

Request a Consultation with Angela Arabia-Meyer

Angela Arabia-Meyer is located in our Hackensack, Bergen County office. She is available to help you with all your divorce, child custody and support, alimony, or other family law matters.

To schedule an initial consultation with Angela, please call (888) 888-0919 or click to schedule online.