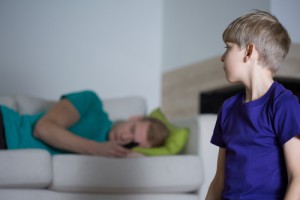 Are you an alcoholic with kids — or are you married or divorced from an alcoholic spouse? Here is how alcoholism affects child custody, and what an alcoholic parent can do to regain visitation rights.

The National Survey On Drug Use And Health estimates that 10% of children in the U.S. – that’s a whopping 7.5 million children under the age of 18 — live with an alcoholic parent. Being raised by a parent with an alcohol abuse disorder increases a child’s risk for the following:
– Depression and anxiety
– Problems with cognitive and verbal skills
– Parental abuse and neglect
– Potential to develop their own alcohol problem that is 4 times more than children raised by non-alcoholic parents

Given that children’s welfare is the #1 priority of the family court system, it’s no surprise that alcohol abuse plays a major role in the loss of child custody. However, courts also believe it’s in a child’s best interest to have a relationship with each parent. It’s for this reason that a parent who has lost custody due to alcoholism can have his parental rights reinstated.

In 2007, Former Baywatch star David Hasselhoff temporarily lost custody of his teenage daughters after the release of a video showing him in a drunken stupor. After regaining custody just a month later, that ruling was subsequently changed to joint custody with his ex-wife – who also struggled with alcohol addiction — at his December 2007 court date.

Let’s take a look at what’s required for an alcoholic parent to regain custody.

A court will generally order the alcoholic parent to undergo some or all of the following before re-petitioning for custody:
– Substance abuse treatment such as rehab, outpatient substance abuse counseling, and Alcoholics Anonymous meetings.
– Random UAs (urine samples to detect alcohol) as well as UAs prior to visitation
– Psychological evaluation
– Monitored visitation

Parents who have fulfilled the court’s requirements need to file a motion indicating that they have done so. They will also need to document proof of treatment and provide evidence that they are in recovery and are now able to care for their child. Failure to comply with the court’s treatment orders can result in loss of custody – permanently.

Are you co-parenting with an alcoholic, or are you the alcoholic parent seeking visitation rights? Our family law attorneys can explain your rights and how it applies to protecting your child’s best interests. Please contact us to schedule a confidential attorney consultation. 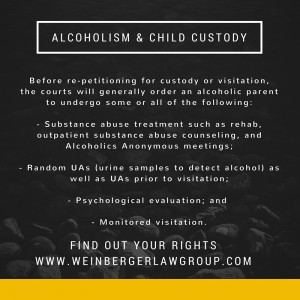